Boat captains host fish fry for those in need

CLEARWATER, Fla. - Many people celebrate Thanksgiving by giving thanks. But "giving" and "thanks" can happen any day of the year.

The night before Thanksgiving, a group of boat captains and volunteers shared their gifts from the sea with more than 150 people in need. They held a fish fry, piling plates high with seafood and other hot side dishes.

It was not a major, organized effort; just a group of people who wanted to do something good for their neighbors.

"Ever since I was a child, my father and I had done fish fries," Frioud said. "We would go get a bunch of mullet, do a fish fry for friends, fish fries for parties." 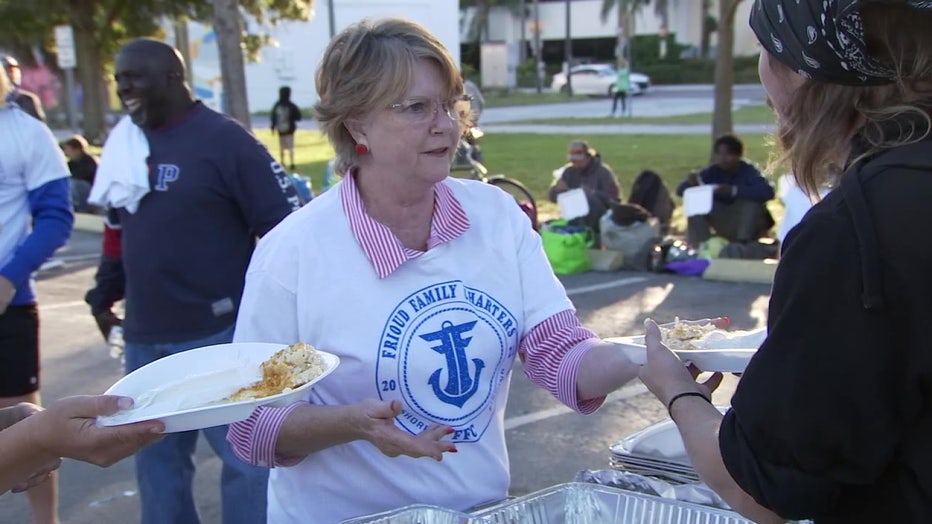 His young sons got an idea. Why not fry their fresh catches for the homeless? They teamed up with other boat captains and The Refuge Church's homeless outreach and tossed out their nets.

It started as a small, grassroots effort. By Thanksgiving Eve, more than 150 people lined up for a hot plate. Baystar Restaurant Group donated 70 pounds of fish. Caracara brought the sides.

"They had beans and greens, they had roasted potatoes, they had dessert for them, they had Mexican street corn," Frioud said.

The smallest hands of children like Chase Bechet and Noah Bogan passed plates to the right hands.

"It really makes a difference when you do this stuff," said Bechet.

"Since they've been having such a rough life, we wanted to make them better," said Bogan.

Ron Wessling was among those served a hot, fresh meal.

"Some of us are homeless but we're good people," he said.

He's been homeless for seven years. Though the outpouring of compassion got him a little choked up, he can't help but smile.

"Oh man, the food was great, you know?" Wessling said. "They fed us all more than we needed. All the kids were out giving stuff around and it was very nice."

Frioud and his friends are humble. They're just a bunch of people doing something good, nothing more.

"You could sit at home, and you can argue about politics on Facebook, or you can actually go out into your own community and do something," Frioud said.

He hopes that someday, helping your neighbors isn't a noteworthy Thanksgiving event.

"My main goal with the children is for them to understand that this isn't what good people do. It is what you're supposed to do," Frioud said