SARASOTA, Fla. - At the Florida Red Tide Mitigation and Technology Development Facility at the Mote Aquaculture Research Park, the OZONIX Mobile Water Treatment Unit is being put to the test. The system processes up to 4,000 gallons of water per minute, removing red tide while allowing other marine life to thrive.

It's treated and sent back out, cleaner and less toxic than when it came in.

"This initiative is about getting a rebalance of harmony between human society and the environment. I’m convinced this initiative will do that," said Dr. Michael Crosby, the president and CEO of Mote Marine.

The machine, which is housed inside a tractor-trailer, is being used to mitigate the damage done by red tide organisms, but it's been utilized in the past for many types of wastewater treatment.

"The technology is developed, so it’s applying the technology for the specific applications primarily based on the volume of water and location," said Chuck Smith with Guardian Ozone. 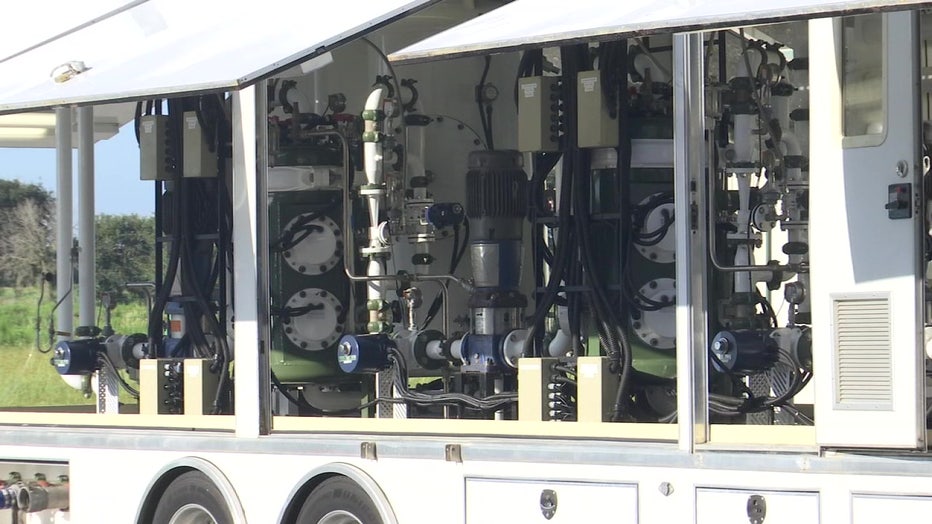 "The water comes in, four technologies are used together that are greater than their individual components. It’s a forced multiplier. It’s a single pass, it comes out the other side and the water is treated with no chemicals and no lasting harm," said Steve McKenzie with Prescott Clean Water.

Scientists are paying close attention to what the treatment could do to marine life. So far, shrimp and clams continue to thrive.

"When you see the living shrimp in the tanks, the living clams remaining in the tanks that have been exposed to this technology. It’s denatured the toxin, it killed the red tide, those organisms are still alive, that’s what we want to see," said Dr. Crosby.

RELATED: Red tide through the decades: Still a mystery

Two dozen technologies are being tested at the facility; tools that could one day be deployed together to further fight red tide.

"We will be successful we are being successful in developing these technologies, but we need to be methodically so when we deploy we know they will do no greater harm to the environment than the red tide already does," said Dr. Crosby.