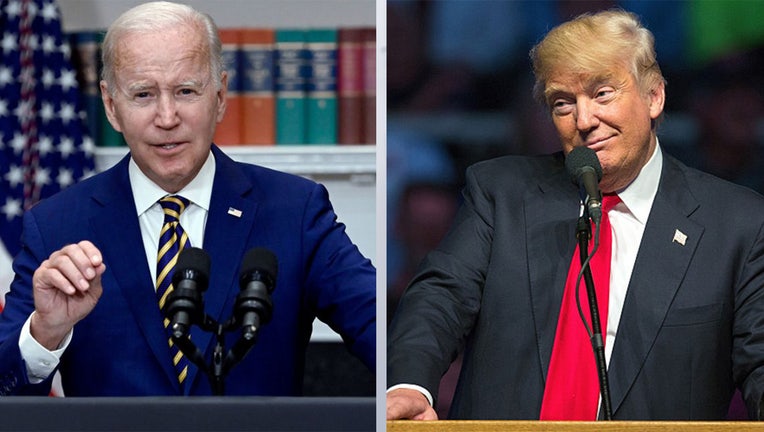 Hypothetically, if a presidential election between Joe Biden and Donald Trump were to take place again today, Biden would win. At least that’s according to a poll from The Wall Street Journal.

The poll, which was conducted between August 17-25, gauged voter turnout, their stance on the current economic situation and views of political parties among several factors.

The most notable question, however, was: "Hypothetically, if the 2024 election for President were held today and the candidates were Joe Biden, the Democrat, and Donald Trump, the Republican, for whom would you vote?"

Here are the results:

And 6% of people who participated in the poll answered "undecided."

The slight bump for Biden may not be a huge surprise considering some of his recent successes on climate and health care legislation.

In just the past several weeks, Biden has signed into law a climate and prescription-drug package that accomplishes many of his party’s long-held objectives; Congress has sent him bills that impose strict limits on guns and set out a plan to boost U.S. high-tech manufacturing. A drone strike killed al-Qaida leader Ayman al-Zawahri, average gasoline prices have fallen back below $4 per gallon and there are signs that inflation — while still white-hot — may finally be cooling

On Tuesday, President Joe Biden signed the Inflation Reduction Act into law and it includes the most substantial federal investment in history to fight climate change — some $375 billion over the decade — and would cap prescription drug costs at $2,000 out-of-pocket annually for Medicare recipients. It also would help an estimated 13 million Americans pay for health care insurance by extending subsidies provided during the coronavirus pandemic.

Biden or Trump in 2024? Many Americans say neither

Despite the positive result for Biden, it appears many citizens would actually prefer neither Trump nor Biden to run for a second term, according to a poll conducted by Yahoo News and YouGov earlier this month.

The poll, which was done between July 28-August 1, found that 58% of participants believe Trump should not run again and 66% said the same about Biden.

In fact, a majority of people believed it would be "the worst" if a rematch took place between Biden and Trump in 2024, according to the Yahoo News/YouGov poll.

And when asked who was a worse president, 45% of participants said Trump while 44% said Biden — a very small difference.

But once again, similar to The Journal’s poll, people said they would rather vote for Biden over Trump if there are no other options.

Neither man has formally announced an intention to run in 2024, but both are widely expected to.

Some Biden observers see the president, who came out of political retirement because he believed himself best able to take on Trump in 2020, as less likely to seek reelection if his predecessor ultimately opts not to run.

If Biden runs, he’ll have to level with voters about his age — convincing them he’s really up for a second term that wouldn’t end until he’d be 86. Still, Cedric Richmond, one of Biden’s closest White House advisers, told The Associated Press such discussions could actually help Biden.

"I’m not going to let people, all of a sudden, say wisdom and experience is a bad thing," Richmond said. "The president of the United States, leader of the free world, that’s exactly what you want."

While Biden’s age is unprecedented — so, too, would Trump’s at 82 — there’s almost as little tradition of presidents not seeking reelection after just four years in office. The last one was Rutherford B. Hayes in 1880.

White House allies stress that the 2024 decision will ultimately be Biden’s alone. He’s on track to follow a similar timeline to former President Barack Obama, who declared for 2012 reelection in April 2011, aides say.

No modern incumbent president has faced such hesitation within his own party, nor been realistically threatened in a primary. Intra-party challengers, if they emerge, could weaken both the president and his party.

"If someone were to say that a president had a record of accomplishment that I just described, without putting a time frame on it, the logical response would be: That person had a successful two-term presidency," Jeffries said.