Even though Betty White isn’t here to see it, fans of the legendary and beloved actress will still honor what would’ve been White’s 100th birthday on Jan. 17.

The lovable "Golden Girls" and "Mary Tyler Moore Show" actor died from a stroke she had six days before her Dec. 31 death at age 99. She passed at her home in the Brentwood section of Los Angeles as the result of a Dec. 25 cerebrovascular accident, the medical term for a stroke.

White had anticipated celebrating her centennial birthday. In a People cover story on White’s upcoming 100th birthday, the magazine’s Jan. 10 issue touted White’s secrets for longevity and quoted her as saying, "Funny never gets old."

"My 100th birthday… I cannot believe it is coming up, and People Magazine is celebrating with me!" she tweeted on Dec. 28 in what would be her last post.

A film honoring White on her birthday will be released as planned for a one-day showing in more than 900 theaters nationwide, said Steve Boettcher and Mike Trinklein, producers of "Betty White: 100 Years Young — A Birthday Celebration."

If you type "Betty White" on Google, rose petals will fall with a message saying "Thank you for being a friend."

Fans, along with many organizations, plan to pay homage to White on Jan. 17 by donating to an animal shelter or rescue mission in her honor in what’s called the "Betty White Challenge." White was a lifelong animal lover who worked tirelessly to raise money and support various causes.

"Betty’s love for animals as she says started in the womb….She had an uncanny way of communicating with all types of 4-legged creatures…The animals just knew through Betty’s voice and body movement that she meant no harm," Jeff Witjas, White’s agent previously told FOX Television Stations. "In fact, there may have been a few times she would make a funny face and the animal would show signs of smiling….Betty always knew how to work her audience. I plan on Betty’s birthday to do a number of personal and private things to celebrate her fabulous life."

Purina and Petfinder announced last week they will join fans in taking on the #BettyWhiteChallenge by donating a split $15,000 between two animal organizations.

White began her television career as $50-a-week sidekick to a local Los Angeles TV personality in 1949. She was hired for a local daytime show starring Al Jarvis, the best-known disc jockey in Los Angeles. Her combination of sweetness and edginess gave life to a roster of quirky characters in shows from the sitcom "Life With Elizabeth" in the early 1950s to oddball Rose Nylund in "The Golden Girls" in the ’80s to "Boston Legal," which ran from 2004 to 2008.

But it was in 2010 that White’s stardom erupted as never before.

In a Snickers commercial that premiered during that year’s Super Bowl telecast, she impersonated an energy-sapped dude getting tackled during a backlot football game.

"Mike, you’re playing like Betty White out there," jeered one of his chums. White, flat on the ground and covered in mud, fired back, "That’s not what your girlfriend said!"

A month later, cable’s TV Land premiered "Hot In Cleveland," the network’s first original scripted series, which starred Valerie Bertinelli, Jane Leeves and Wendie Malick as three past-their-prime show-biz veterans who move to Cleveland to escape the youth obsession of Hollywood. They move into a home being looked after by an elderly Polish widow — a character, played by White, who was meant to appear only in the pilot episode.

But White stole the show, and the salty Elka Ostrovsky became a key part of the series, an immediate hit. She was voted the Entertainer of the Year by members of The Associated Press. 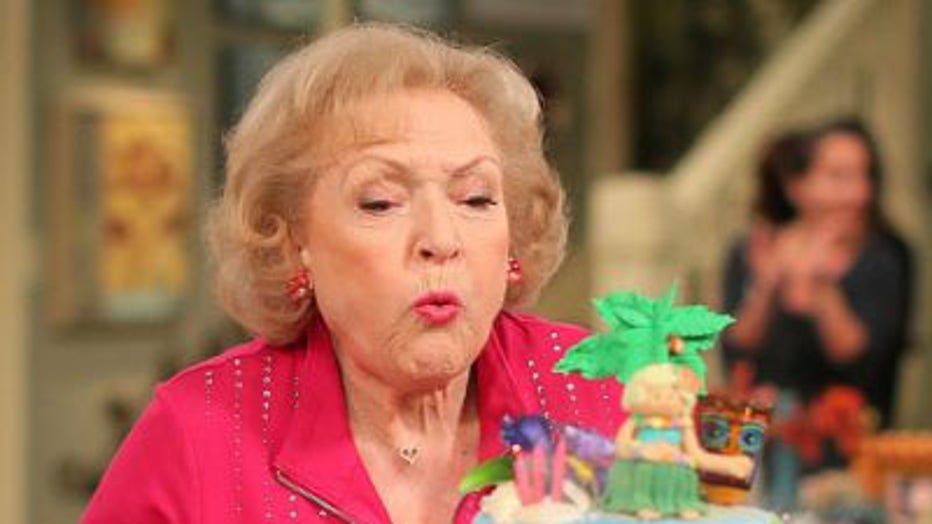 FILE - Actress Betty White poses at the celebration of her 93rd birthday on the set of "Hot in Cleveland" held at CBS Studios - Radford on January 16, 2015 in Studio City, California. (Photo by Mark Davis/Getty Images for TV Land)

"It’s ridiculous," White said of the honor. "They haven’t caught on to me, and I hope they never do."

By then, White had not only become the hippest star around, but also a role model for how to grow old joyously.

"Don’t try to be young," she told the AP. "Just open your mind. Stay interested in stuff. There are so many things I won’t live long enough to find out about, but I’m still curious about them."

And when asked how she had managed to be universally beloved during her decades-spanning career, she summed up with a dimpled smile: "I just make it my business to get along with people so I can have fun. It’s that simple."

The Associated Press and Stephanie Weaver contributed to this report. This story was reported from Los Angeles.