TAMPA, Fla. - Americans make about 240 million 911 calls each year. It could be for something minor like a fender bender, or it could be an urgent, life-or-death situation.

When it's you dialing those three numbers, that single call could be the most important one you ever make. And to the people who answer those calls, every single one matters the same.

This week is National Public Safety Telecommunicators Week. We got the opportunity to see where Tampa's 911 calls are answered and what it truly takes to wear the headset.

They're the first ones to answer in a crisis and the link between calls for help and those racing to the rescue.

"You are the voice of calm in the storm," said Communications Technician Emily Holt.

"The minute that line clicks into your headset, yeah, that person is relying on you," said Alicia Kovach, a communications technician III and communications training officer.

Tampa's 911 Communications Center handled just over one million calls in 2021, and 362,864 were for an emergency while 298,539 of those calls came from a cell phone. They swiftly answer 90% of those calls within 15 seconds, at or above the national standard.

It's a team effort. The call taker answers, typing detailed notes including names, descriptions, directions, discerning whether they need police or to be transferred to fire and EMS.

"The number one thing is location," Kovach said. "Without the location, I can't do anything for anybody."

In some cases, their systems can find you if you're not sure where you are. 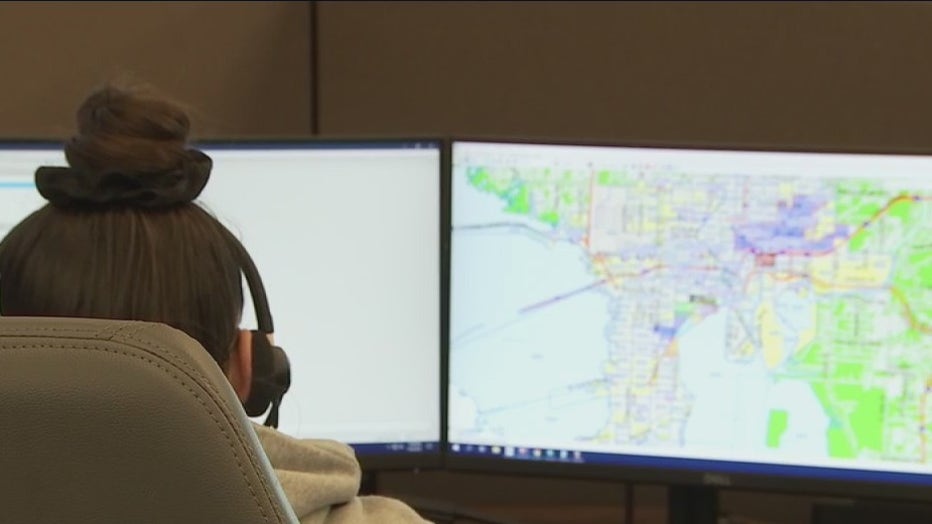 "We're pretty sure it's within 36 meters of that location," Kovach said, pointing to a radius of a caller on a map.

To them, no detail is too minor. "They really could be life or death," Holt said.

The call takers' notes go to dispatchers who may be responsible for more than 60 officers on their assigned radio channel. They relay updated information and can request more details, so officers know exactly what they're getting into.

"Our job is their safety," Holt said. "Officer safety is number one. We try to make sure that we can collect as much information for them as possible."

All Public Safety Communications personnel are required to be state-certified. That includes 232 hours of instruction, passing a state exam, and successfully completing training programs.

"The training program is typically six to nine months," Kovach said. "However, I can confidently say you won't be absolutely sure of yourself until it's like a year in."

It takes a high-stress tolerance, a cool demeanor, and a mastery of multitasking.

"You never know what you're going to get," Holt said. "So, you could be talking to somebody about a parking complaint, and then the next call you get somebody has been shot. There's a moment of, 'oh man,' and you know, white-knuckle for a second, but your job is to muscle past that."

They're the unsung heroes in anything from an emergency to a minor mishap. We may not see them, but we hear them. And this week we thank them for the lives they help save and the first responders they keep safe.

It's National Public Safety Telecommunicators Week, and right now, the City of Tampa could use 35 more.

In a profession with a high risk of PTSD, they support each other through the grueling days, and they host food, clothing, and toy drives to reach people before they ever call for help.

"It's a fun group of people here," Holt said. "But when things are happening, it's just, it's unspoken. It's time to work. It's time to take care of the city."

Yes, the responsibility and emotional weight of the job are often heavy. But the greatest reward is relief on the other end of the line.

"We want to make sure that everybody goes home safe at the end of the day," Holt said.

"There's been plenty of calls that at the end, the person thanks me," Kovach said. "It's just nice to know that you make people feel better when they're scared or upset. It's a hard job, but it's a good job."

Though the job is stressful, Tampa's new police Chief Mary O'Connor has vowed to make "Employee Wellness" a priority to keep the department healthy, physically and mentally.

If you think you have what it takes to be a Communications Technician and to answer the call for help, you can find the Tampa Police Department/Tampa Fire Department job posting here.