Crews try to save owl

SAFETY HARBOR, Fla. - A rescue operation is underway to save a lone owl after wildlife groups said its family was wiped out by rat poison. Bird activists said so far at least four owls – including the chick’s parents – have died from eating rats that ate rat poison.

One lone owl – a female named Daisy who's just months old and lives in a tree in Philippe Park – is now without her parents to teach her how to survive. 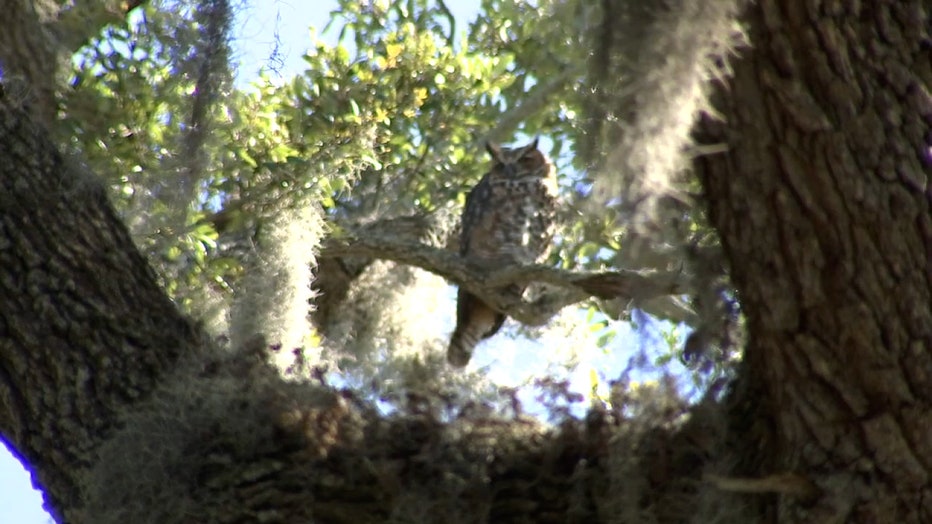 "This should have never happened to this beautiful family that is so loved by so many people," Clearwater Audubon Society Vice President Kim Begay said.

Daisy's dad Oliver has been nesting at the park for the last eight years, but Friday he was found dead. Wildlife groups believe rodenticide caused its death after he ate a rat that had consumed rat poison also known as secondary poisoning.

"Owls aren't breaking into the traps themselves, but they're eating the rats after the rats consume the poison. They get sluggish. They look like an easy meal, and it bioaccumulates in the owls, and we end up with situations like this," Birds in Helping Hands Board Secretary Fairl Thomas said.

In March, the mom owl named Emily was found dead in the Bay along with one of her three chicks. Both necropsies show rodenticide caused their deaths. Weeks later, another chick was found dead. Currently, the two remaining necropsies are pending, but Birds in Helping Hands believe all four owls died from secondary poisoning.

"It's a completely senseless tragedy, completely preventable," Begay said. "There is absolutely no reason it should have happened."

READ: 'Look at this beast!': Gator with missing foot walks under driver's truck in Venice, shakes it from beneath

After the first owl death in March, Birds in Helping Hands convinced the City of Safety Harbor to stop placing rat boxes in their city parks. The city now plans to educate to community by placing these informational pamphlets in their utility bills next month encouraging residents to stop using certain rat poison.

"You can use snap traps, zap traps, live traps or even if you choose to use poison there are two types of poison that won't kill secondary consumers and that's the smart choice," Thomas said. "You just have to do the research because so many people aren't aware that this is a problem."

As for Daisy, volunteers have been watching her around the clock. Traps are set with live rats in hopes of catching her soon. Once rescued, she'll be taken to the Raptor Center of Tampa Bay to learn how to hunt from an adult great-horned owl in hopes of eventually releasing her back into the wild.