PINELLAS PARK, Fla. - Robert Gunn, III is one of the most coveted kickers in the country. Scholarship offers have been rolling in since January.

He's had official offers from Florida Atlantic University, Army, Navy, and Air Force, but after a trip to Texas and an offer from the Longhorns this month, the kid with a booming leg became even more in-demand.

"My dad always called it a ‘pipe dream,’" Gunn, III told FOX 13 Sports. "Me and him used to go to SYA Field down in Seminole. Used to kick until 11 at night, so I think it was worth it."

Robert's summer swing took him from Texas to Clemson.

Despite the offer from Texas, Gunn, III went to Clemson this past week on an unofficial visit and to take part in the Tigers' football summer camp, but when he arrived, Clemson Head Coach Dabo Swinney invited Robert to a private audition. 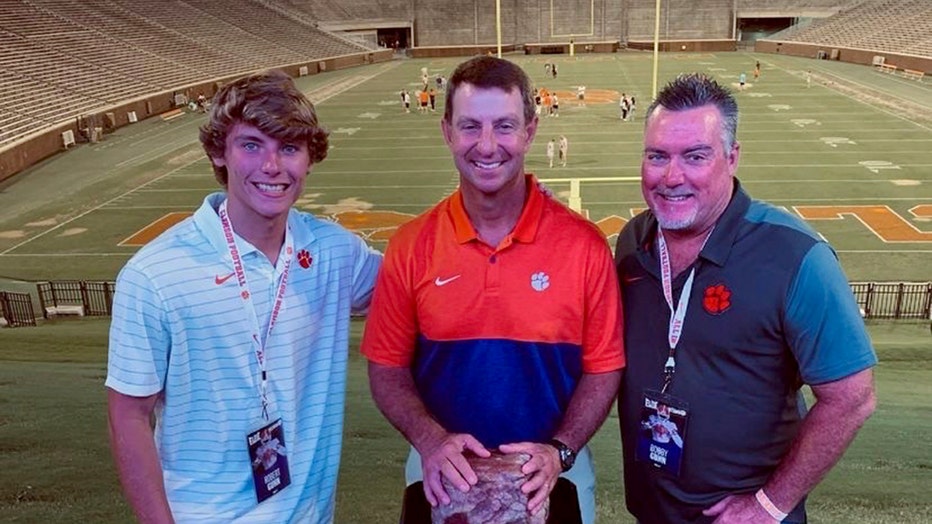 Swinney only needed to see a few kicks to make up his mind.

"Coach Swinney comes over and said, ‘Come to my office,’" said Gunn, III. "Went to his office and he's like, 'We're looking for a 2022 kicker and with your character and who you are and your performance off and on the field, I'm going to give you an offer to [Clemson University.]' I just started bawling my eyes out. He goes, 'Here's the question: How long...' I was like, 'Coach, I want to be a Tiger right now. I'm all in.'"

His father wanted him to wait, with interest from Georgia, Florida, and Florida State, but the rising senior from Pinellas Park is committed to Clemson.

"You know how when Coach Swinney starts talking, you know it's coming," said Gunn, III. "After I said I committed, he was like 'Let's go!' Everyone came in for photos. It was a real moment."

It was a dream come true and a day he's been kicking most of his life for.