So far, it looks like the U.S. Men’s National Team will be among the 32 nations competing in the 2022 FIFA World Cup. Alexi Lalas, who played for the U.S. during the 1994 World Cup, shared his thoughts on how the Stars and Stripes have performed so far in qualifying matches.

No one would blame you for getting excited about the U.S. Men’s National Soccer Team — especially not Alexi Lalas, who played for the Stars and Stripes during the 1994 World Cup.

This year has been kind to the squad. Of their 21 matches this year, they’ve won 16, lost two and tied three. They beat rival Mexico for the CONCACAF Nations League championship in June.

Then in August, the Yanks beat Mexico again — this time for the CONCACAF Gold Cup title. They beat Mexico a third time on Nov. 12, knocking their rival from the top of CONCACAF’s World Cup qualifying table.

Currently, the Americans sit in second place on the table at 15 points, just one point short of the first-place Canadians and one point ahead of third-place Mexico.

They’ve earned the respect of FIFA, who've ranked the Yanks as the 12th best team in the world. And now Lalas believes it's time for Americans to give the squad their respect. 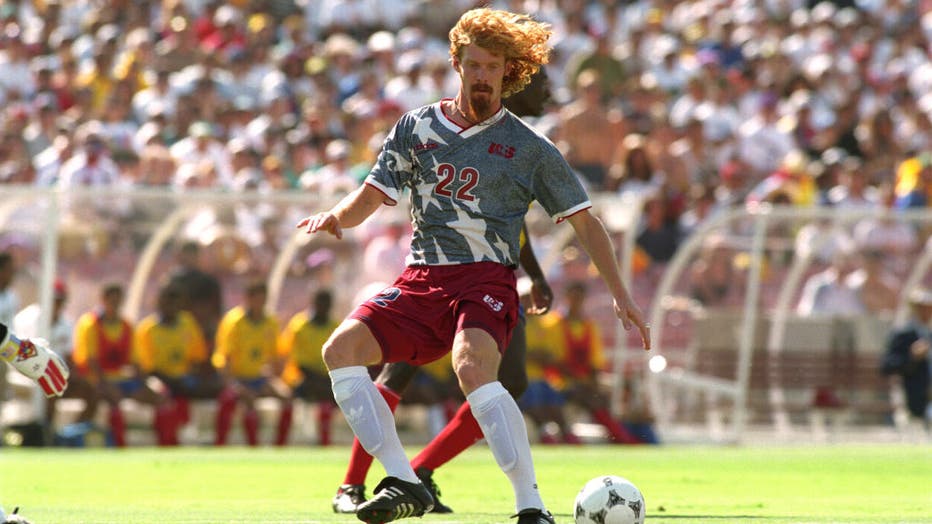 Lalas understands why fans would be hesitant to embrace this team. The men failed to qualify for the 2018 World Cup, so the most many fans can offer is cautious optimism.

"There’s definitely some cautious optimism and we have been burned in a sense over the last cycle. So, I recognize the reticence in case we get burned again," Lalas said. "But I do think this group is different."

He said this group plays with a sense of responsibility to set things right. He thinks they’re already worthy of your attention, but he thinks they will earn your belief.

"This is just a really interesting, obviously talented, yes, very young, and yes, very inexperienced group," Lalas said. "But I think, most importantly, they have a personality and they have identity that I think is relative to the failure of not qualifying for the last World Cup. I think they see a pathway, they see an opportunity to kind of get us back to where we belong and then to do some great things.

As demonstrated by the CONCACAF standings, the USMNT has fared quite well in qualifiers. But to say it has been smooth sailing would be incorrect.

Perhaps smooth sailing in the second half of most matches, where the U.S. has scored the bulk of its points. But the first half of games have been underwhelming — many of them ending without a single American goal.

"Yes, this team at times does struggle and start slowly," Lalas said. "But I do think that (head coach) Gregg Berhalter and company recognize that part of their strategy is to wear people down and then get you later on in the game."

Lalas said that strategy could come back to haunt the Yanks. Competition gets much stiffer once CONCACAF teams start facing European or South American squads.

"The problem will be, as you get up against better competition, if you go to that well and it ends up being empty or dry, that could be a problem," Lalas said. "Because usually, that happens at the worst possible time."

Just like the squad, Lalas said Berhalter is young and inexperienced. He often faces criticism for his roster selection and his starting XI on matchday.

"At times, he takes a lot of crap that is unfair and unnecessary. But I think he’d be the first person to tell you that he’s got big shoulders. He can figure it out."

Lalas believes the frustration with his roster moves demonstrates just how deep the American talent pool has become.

"We’ve had wonderful players, and world-class players and talented players," Lalas said. "I think what’s different about this group is the sheer numbers in terms of that talent and the depth."

Lalas looks at players like Christian Pulisic, the forward who plays professionally for Chelsea and scored the go-ahead goal against Mexico on Nov. 12.

Salas said everybody sits up in their seats and holds their breath when he steps on the pitch because they know he can do some amazing things.

Then, there are young midfielders like Weston McKinnie and Tyler Admas. McKinnie scored the second goal in last week’s 2-0 win over Mexico.

Matt Turner and Zach Steffen are two "incredible goalkeepers," Salas said he’d be comfortable seeing in the net. Turner players for the New England Revolution while Steffen is the backup for Manchester City.

"If there is one position on this U.S. team that is suspect, it is the No. 9 position – the striker position," Lalas said.

For years, Jozy Altidore held that role. But since he relinquished it, the USMNT has not found a successor. But 19-year-old Ricardo Pepi has shown glimpses this fall that he could be the heir.

Pepi burst onto the scene this fall when he scored the go-ahead goal against Honduras in a September qualifying match. The following month, he scored two more goals against.

"Ricardo Pepi has done a good job, but nobody really has taken that over the last couple of years."