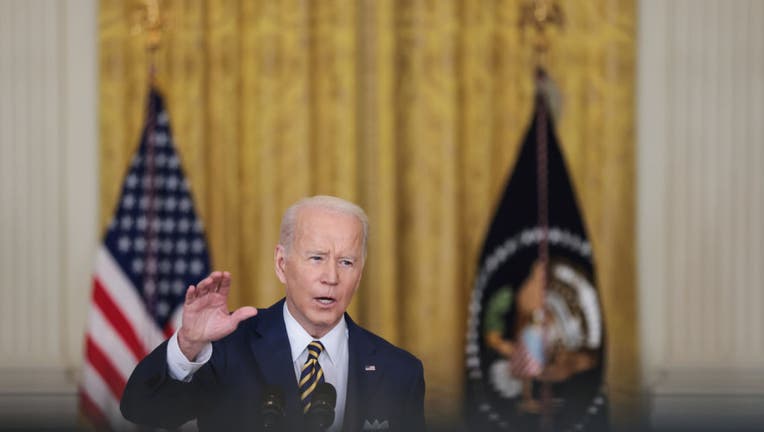 President Joe Biden speaks during a news conference in the East Room of the White House. Photographer: Oliver Contreras/Sipa/Bloomberg via Getty Images

President Joe Biden ends his first year in the White House with a clear majority of Americans for the first time disapproving of his handling of the presidency in the face of an unrelenting pandemic and roaring inflation, according to a new poll from The Associated Press-NORC Center for Public Affairs Research.

More Americans disapprove than approve of how Biden is handling his job as president, 56% to 43%. As of now, just 28% of Americans say they want Biden to run for reelection in 2024, including only 48% of Democrats.
Asked on Wednesday at a wide-ranging news conference about his flagging popularity, Biden responded, "I don't believe the polls."

It’s a stark reversal from early in Biden's presidency. In July, 59% of Americans said they approved of Biden’s job performance in an AP-NORC poll. His approval rating dipped to 50% by late September in the aftermath of the chaotic and bloody U.S. military withdrawal from Afghanistan and amid surging coronavirus infections and the administration’s fitful efforts to push economic, infrastructure and tax policies through Congress.

The latest poll shows that Americans' confidence in Biden's handling of the pandemic — seen as a strength early in his administration — has further eroded as the omicron variant strains the health care system and further exhausts an American electorate that had hoped life would be back to a semblance of normalcy by now.

Just 45% say they approve of Biden's handling of COVID-19, down from 57% in December and from 66% in July 2021.
Americans are even more downbeat about his handling of the economy, with just 37% approving. Growing angst about his economic policies comes as inflation rose at its fastest pace in nearly 40 years last month, a 7% spike from a year earlier that is increasing household expenses and eating into wage gains.

Joyce Bowen, 61, of Knoxville, Tennessee, said Biden deserves credit for encouraging Americans to get vaccinated, but she expressed frustration about the administration's response to soaring inflation.

The part-time cleaner at a public library said she and her older brother, who she helps support, have been eating less meat to offset rising grocery costs and intermittent spikes at the gas pump that have whittled the purchasing power of her $754 biweekly paycheck.

"It’s just hard to keep food on the table and gas in the tank," said Bowen, who voted for Biden but said she'd prefer he didn't run again in 2024.

Asked by a reporter at Wednesday's news conference about other polling that shows a significant percentage of Americans had concerns about Biden's mental health, the president shrugged off those findings.

Gary Cameron, 66, of Midwest City, Oklahoma, said the president’s verbal gaffes and age — at 79 Biden is the oldest U.S. president in history — don't give him confidence that Biden has the skill or energy to pull the country out of its malaise.
"Whenever he does a speech on television, in your mind, you’re thinking ‘God, is this guy even going to get through this speech?’" said Cameron, an independent who voted for Donald Trump in 2020.

Other respondents said that Biden’s age — and life experience that’s come with it — has proven to be an asset.
Nicole Jensen-Oost, 79, of Plano, Texas, said that Biden has demonstrated leadership and empathy through the pandemic by speaking of his own personal grief.

Biden frequently raises the deaths of his first wife and a daughter in a 1972 car crash as well as the loss of an adult son who died of cancer as he has sought to reassure Americans who have lost loved ones to the virus.

"This man has heart," said Jensen-Oost, a Democrat and among the minority of respondents who said Biden is healthy enough to serve effectively as president. "He’s compassionate and the country needs that right now. We didn’t see a lot of compassion in the previous four years."

The poll shows only about a quarter of Americans think the phrase "strong leader" describes Biden very well, while about that many say it’s a somewhat good description. Roughly half say he is not a strong leader. Views of Biden’s understanding of "the needs and problems of people like you" are similar.

Just 16% think Biden's presidency has made the country more united; 43% think it's more divided.
Harlan Epstein, of Cleveland, didn't vote for Biden but was hopeful that the 46th president, who sold himself to American voters as a consensus builder, would govern from the ideological middle.

But Epstein, an independent, said Biden’s push for a $2 trillion climate and social services spending bill and his effort to force larger employers to require their workers to get vaccinated or undergo regular testing have undercut Biden’s centrist reputation.

"He's got to tamp down his far-left wing and start focusing on moderate policies," Epstein said.
Some on the left have also been frustrated with Biden.

The president's first-year legislative victories included passage of a $1.9 trillion COVID relief package and a $1.2 trillion infrastructure bill, but he failed to win passage of his signature domestic spending initiative.

Zachary Lindahl, 34, of Raleigh, North Carolina, said he was disappointed that Biden has been unable to pass the spending package dubbed "Build Back Better," as Democratic Sens. Joe Manchin of West Virginia and Kyrsten Sinema of Arizona balk at the costs and scope.

"It started off well with them passing the $1,400 checks," said Lindahl, referring to stimulus payments that were part of the coronavirus relief package passed early in Biden's term. "But as time went on, it’s been just more of the status quo. Any big idea, they are willing to compromise it down until there is no longer anything there."

Not all is lost for Biden: Many continue to be at least somewhat positive toward the president, his character and his governing.
The new AP-NORC poll shows Biden is in a better position than Trump was at a similar point in his presidency. In February 2018, just 35% of Americans said they approved of Trump.

Rev. Joseph Courtney, 32, an Episcopal chaplain in Los Angeles, said that Biden in some ways has been pretty much the president he expected, bringing a measure of confidence to the electorate by empowering experts and scientists in the country’s battle against the health and economic crises caused by the pandemic.

But Courtney said that Biden has yet to deliver on his promise to build consensus with Republicans or even some of the more conservative lawmakers in his Democratic party. Biden on the campaign trail said that his experience over 36 years in the Senate — and eight years as vice president — would help him rebuild Washington’s "broken" politics.

"He just keeps getting railroaded time and time again," Courtney said. "I don’t understand specifically what he’s adding to the presidency that would make me want to support him running another term."

___
The AP-NORC poll of 1,161 adults was conducted Jan. 13-18 using a sample drawn from NORC’s probability-based AmeriSpeak Panel, which is designed to be representative of the U.S. population. The margin of sampling error for all respondents is plus or minus 3.8 percentage points.