House members voted on a stopgap measure to raise the debt ceiling on Oct. 12, 2021.

WASHINGTON - The Senate has approved legislation that would create a one-time, fast-track process for raising the debt limit with a simple-majority threshold and avoiding a Republican filibuster — setting Congress up to approve a final increase in the coming days.

On Thursday night, the upper chamber voted 59-35 to approve the bill, which was signed by President Joe Biden Friday afternoon.

"I just signed a bill to fast-track the process to raise our debt limit," Biden wrote in a post on Twitter.

"The nation’s full faith and credit has always been a shared responsibility. The bipartisan support of this legislation shows that it is still possible for leaders to work across the aisle and deliver," Biden added.

In short, the bill tucks a provision to fast-track the debt limit process into an unrelated Medicare bill that will prevent payment cuts to doctors and other health care providers. That measure passed the House on Tuesday by a vote of 222-212 following weeks of talks between Senate Minority Leader Mitch McConnell, R-Ky., and Majority Leader Chuck Schumer, D-N.Y., on how to avoid a devastating federal default. 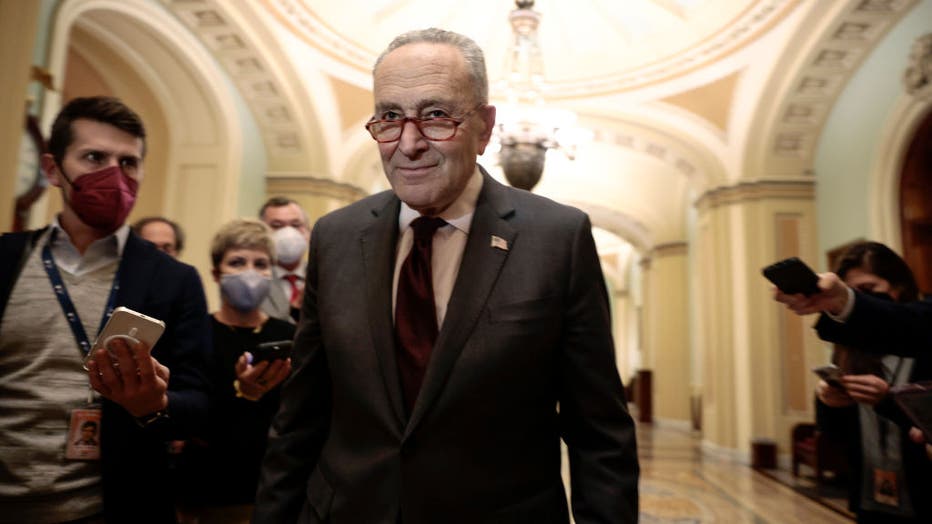 FILE - U.S. Senate Majority Leader Chuck Schumer (D-NY) walks away from reporters after speaking with them outside the Senate Chambers of the Capitol on Dec.7, 2021, in Washington, D.C. (Photo by Anna Moneymaker/Getty Images)

Following Biden’s signature, the bill will open the process for the Senate to pass a debt ceiling increase by a specific amount with a simple Democratic majority — and without having to worry about gaining the 60 votes necessary to overcome a filibuster. The Senate is evenly split 50-50, where Democratic Vice President Kamala Harris serves as a tiebreaker.

Key to the agreement is that Democrats will have to vote on a specific amount by which the debt ceiling will be lifted. The amount has not yet been disclosed, but it is sure to be a staggering sum.

The actual debt ceiling increase is not expected to get any GOP Senate votes and few in the House.

Some Republicans want to try to blame Democrats for the nation’s rising debt load and link it to Biden’s roughly $2 trillion social and environmental spending bill. But the debt ceiling will have to be increased in the coming days or weeks, and the big-spending package is still making its way through Congress.

The increase is needed to meet financial obligations incurred over numerous presidential administrations and sessions of Congresses — decades of deficit-financed spending, already approved, that still stretch years into the future.

What happens if the U.S. defaults on its debt?

A failure to suspend or lift the debt ceiling would lead to an unprecedented default that would allow the government to pay its bills only with the cash that comes into the U.S. Treasury Department. The U.S. credit rating would likely be downgraded, interest rates on loans would soar and a recession would likely ensue.

In addition, payments to seniors, veterans and others could be delayed or even stopped.

"Everyone in America would feel the effects of a default. If the United States were to default, tens of millions—including families with children, retirees, and veterans—would quickly, even overnight in some cases, face the prospect of losing the regular federal payments that help them to make ends meet," the White House states in a related blog post.

Congress previously approved a $480 billion increase in the nation’s debt limit in October. That’s enough for the Treasury to finance the government’s operations through Dec. 15, according to Treasury Secretary Janet Yellen's projection.

How did we get here?

Nearly all Senate Republicans earlier this year signed a letter saying they would refuse to vote to increase the debt ceiling in protest of Democrats' spending, according to FOX Business. They argued that Democrats should raise the limit using reconciliation, a process to quickly advance high-priority fiscal legislation and is not subject to filibuster in the Senate.

Democrats used this process to pass a $1.9 trillion COVID-19 relief bill and have been employing it to try to pass Biden’s spending bill.

But Senate Democrats argued that taking such a step would be too cumbersome and a standoff ensued in October. McConnell eventually backed the temporary debt limit increase through December but said Republicans would not vote to increase the debt ceiling again.

"The pathway our Democratic colleagues have accepted will spare the American people any near-term crisis, while definitively resolving the majority’s excuse that they lacked time to address the debt limit through (reconciliation)," McConnell said Oct. 7. "Now there will be no question: They’ll have plenty of time."

With potential default looming, McConnell and Schumer managed to reach a deal earlier this week without Republican votes or via reconciliation by combining it with the Medicare bill.

What are lawmakers saying?

The one-time, fast-track bill tied with unrelated Medicare legislation fits the two goals McConnell had set months ago: Democrats will need to pass the debt ceiling increase on their own, without GOP support, and they will have to increase it by a specific amount.

McConnell was able to deliver enough Republican votes to advance the bill Thursday when 14 Republicans sided with Democrats to end the debate — which was the most unpredictable vote in the process. That support largely held with the vote on the final passage of the measure later in the evening.

"This is the responsible path forward," Schumer, the Democratic Senate majority leader, said. "No brinksmanship, no default on the debt, no risk of another recession."

Still, it wasn't easy for McConnell. Republicans complained privately and on the Senate floor about the deal, according to the Associated Press. While they will not have to vote for the debt limit increase, they had to facilitate getting the Senate to the final vote.

"A deal has been made to give us — some of us see it this way anyway — a choice between voting for a heart attack or cancer," said Sen. John Kennedy, R-La., who voted against advancing the plan.

But some Republicans said the United States should not send signals to the rest of the world that cast doubt on its creditworthiness.

"It was the right thing to do because the last thing in the world that this country needs is a default," said Sen. Lisa Murkowski, R-Alaska.