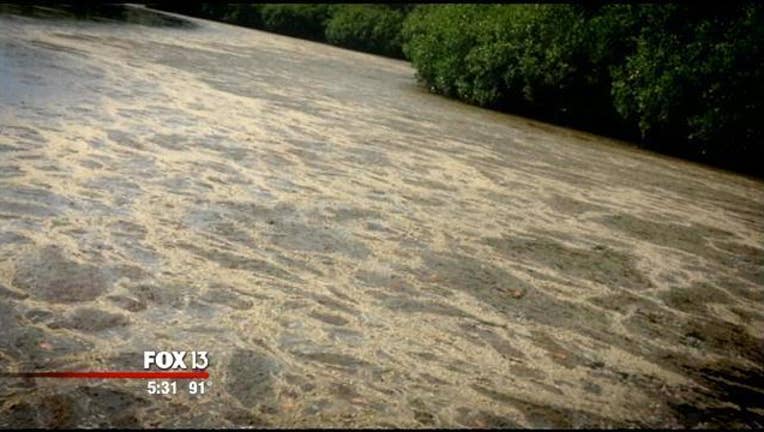 John Vogel's family has lived in the south Hillsborough County community of Adamsville area for a century. The tradition of fishing in the part of the Bay deemed “The Kitchen” goes back just as long.

"We'd all as a family come down to get the oysters off the oyster bars, catch the crab, catch the fish and come home and eat them," he said.

He says another organism has been creeping into his “kitchen” lately: algae. Lots of it.

"This is the worst I have seen it this time of year," he said.

Pictures Vogel sent to FOX 13 show that part of the estuary covered in macro-algae. The usually clear water was opaque.

Vogel had his suspicions of the nearby South County wastewater treatment plant contributing to the problem, pointing out that rainy weather means people are using less irrigation water. That means the plant would have more to discharge into the bay – something it’s allowed to do by permit.

Data provided by Hillsborough County Public Utilities shows the plant was discharging water between June 9 and June 18, but that water was treated, reclaimed water. Test results for June showed no fecal coliform bacteria.

Instead, there’s a better explanation, according to Tom Ash, a water quality manager with the EPC.

The macro-algae particularly prominent this year is called Lyngbya.

“[It] sometimes looks like raw sewage. We'll get complaints from concerned citizens all the time that say it looks like one of the ships in Tampa Bay had dumped its ballast," he said.

It was a warm spring, and recent torrential rains caused extra nitrogen – plant food for algae – to run into the bay. Add wind to the mix to stir up all those nutrients, and it’s the perfect storm for Lyngbya to spring up.

"Right now, biologically, everything's really cranking in the bay. So, you're going to see those types of things," he said.

The EPC says it's more concerned about microalgae - the invisible stuff that can bloom and suck up oxygen, leading to things like Red Tide. Despite the current ripe conditions, there hasn’t been any evidence of microalgae blooms, Ash said.

Tampa Bay Watch says what happened in The Kitchen in the 1970s shows how too much macro-algae can wreak havoc on the ecosystem, too. At that time, macro-algae would cover several square miles of the Bay.

It's when that kind of macro-algae sticks around for too long that it becomes a big problem.

"You always need to be concerned when you see these high levels of algae in the bay and its effect on seagrass and other wildlife,” said Peter Clark, president of the Tampa Bay Watch. “But we also need to realize it's summertime in Tampa Bay and it's really how long and persistent these algae blooms are that will have a roll in the health of the Tampa Bay estuary."

Clark says nitrogen levels in the bay have continued to improve for the last 30 years or so, after stringent water quality standards went into effect. But a growing population means more nutrients end up in stormwater run-off from things like lawn fertilizer.

“It's not unusual to see large numbers of algae in the bay in the summer months, but we hope on average that will even itself out in the bay and will continue to improve as we move into the future,” he said.

George Cassady, director of Public Utilities for the county, says that’s the agency’s goal, as well.

“No one wants to see algae blooms,” he said. “The nutrient content of our discharge is way below what our permits require.”

Cassady says nothing has occurred with the plant that would have contributed to the latest macro-algae. If a  wastewater treatment plant has an issue with the treatment process, it’s required to contact local, state and federal agencies to report it.

“There's no benefit in hiding anything,” he said. “We’re 100% open with the regulatory agencies.”

The EPC came out to the Kitchen and took water samples last week, in response to Vogel’s concerns. The official results aren’t back yet, but officials say initial indications were that there’s nothing to be alarmed about.

Vogel says he’ll keep reporting anything that he finds unusual.

“We love the bay. We’re out here all the time,” he said. “I’m fighting for my family and everyone who lives here.”