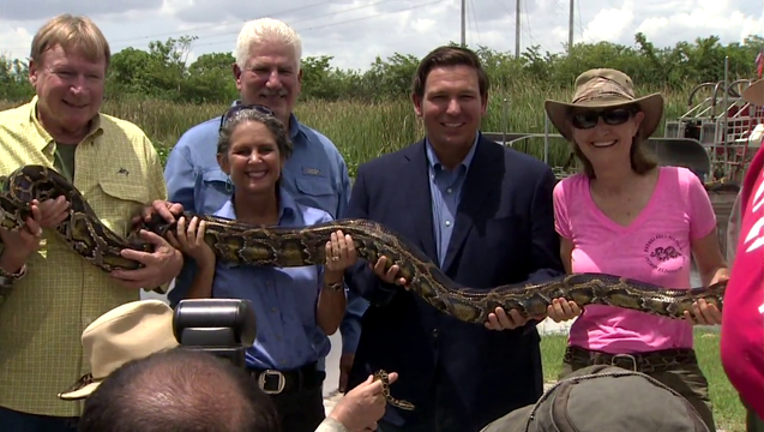 The state has been paying select hunters to catch and kill the invasive snakes on state lands since March 2017. It even hosts a popular python hunt for the public every three years in an attempt to control the tens of thousands of pythons that are estimated to be slithering through the Everglades. Scientists say the giant constrictor snakes, which can grow over 20 feet long, have eliminated 99% of the native mammals in the Everglades, decimating food sources for native predators such as panthers and alligators.

More than 3,000 pythons have been removed from the Everglades since 2017, not counting the reptiles removed by the public in python hunts, according to wildlife officials. But those efforts have not been enough, experts said Wednesday.

DeSantis said Florida will double its resources for python removal and that the state Department of Environmental Protection and the Department of Agriculture have a new agreement to begin hunting pythons in 130,000 acres of state parks. But the governor's staff did not immediately answer questions about how much the stepped-up efforts would cost or where the state funds were being allocated from.

"They've threatened endangered species. They've decimated other animal populations ... there's no natural predators for these. They can eat small alligators even," the governor said, jokingly asking the snake wranglers to take a few steps back from the podium where he was speaking.

The 12-foot python next to him weighed about 50 pounds and is around 7 years old. It's distinct black and gold markings glimmered more prominently than usual because it had just shed its skin. Behind the governor, loud airboats roared their engines as they took tourists through the tall grass of the protected swampland known as the Everglades.

Next to the massive reptile, Tom Rahill of the South Florida Water Management District, held a restless baby python that he caught on the side of the road the night before.

The governor's announcement comes at a crucial time for the species - hatchling season.

"A 16-foot python could have 60, 65 babies running around. The population just explodes," said Rahill.

DeSantis said the U.S. Department of the Interior is also stepping in to get snake hunters to remote areas of Big Cypress National Preserve they've previously been unable to access, but details of that program were still in the works.

Burmese pythons were brought to South Florida as pets in the late 1970s. They were released into the wild and have devastated native populations of bobcats, opossums, raccoons and foxes and have nearly wiped out cottontail rabbits.

The state is also looking for the public's help in catching the invasive reptiles, noting plans to make the python hunt a yearly event and asking tourists, boaters, hunters and hikers to aid in the daily removal if they have the expertise.