CLEARWATER, Fla. - The tourism group Visit St. Pete-Clearwater has teams randomly roaming beaches to give out $25 gift cards for good pandemic behavior. The team workers are looking to reward people for wearing a mask, spreading out on the beach, sanitizing while at businesses, and being patient and kind.

"The whole idea behind it is to communicate that 'Hey, we want you to be safe while you're here visiting,' and if you're a visitor, this is what expectations are, but also as a resident to reinforce that as well," said Steve Hayes, the president and CEO with Visit St. Pete-Clearwater.

Hayes said it is part of the Rise to Shine program to reward people's good behavior during the pandemic. With the gift card comes your signature on a pledge to stay safe. So far, Hayes said over 23,000 took the pledge as of Friday morning, including out-of-town visitors and locals.

Some residents hope it reminds people of the bigger picture.

"Everybody loves getting something for free. I would hope they're not just taking it because they can. I would hope that would help them to remember to have a conscience especially if you are away from home," said Dawn Parker of St. Pete. 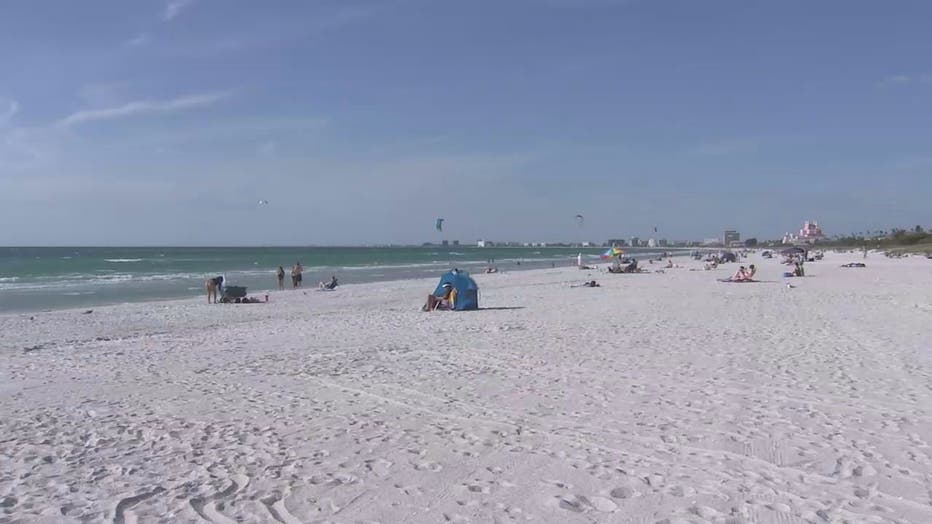 As for what to do with the free money, the idea is to spend it at a local place in the community.

"It is good to see. It does feel good. Having worked in the hospitality industry for so long, it is important. It's what makes everything go," said Parker.

After working at a restaurant during spring break in the past, Kristina Huggins said she knows how far those dollars can go.

"As far as spending money in restaurants, anything where you can give people who make cash or who make below a regular living wage, it's only going to benefit them and their own family," said Huggins. "Obviously, I care about the health of my community. My family's from here, they live here. So anything that incentivizes public good health I support. I think it's a good idea."

Visit St. Pete started the program during the last week of February, and they plan to keep it going through mid-April.