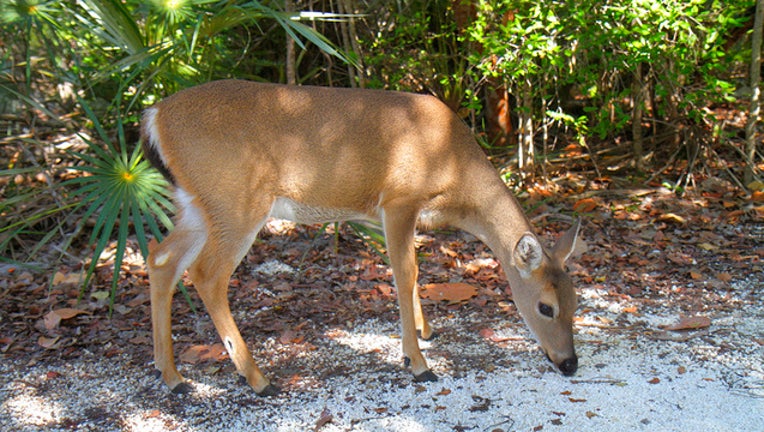 MIAMI - The federal government is proposing to strip the tiny Key deer of its endangered species status despite what environmentalists say are continuing threats to the animal due to development in the Florida Keys, its only known habitat.

The deer is America's smallest, growing to about 30 inches at the shoulder, and has become a tourist attraction in the Keys. Its numbers are currently estimated at about 600, up from as low as a couple dozen in the 1950s.

The U.S. Fish and Wildlife Service says its studies show there are no more significant threats to the deer, and has set a public forum on Aug. 22 in the Keys on removing the deer from the Endangered Species List. Environmental groups say stripping the deer of endangered status would leave it at the mercy of further human development and sea level rise.

Alicia Putney, the former president of Key Deer Protection Alliance, said she was shocked that the deer might be delisted.

"The population may have increased but the Key deer is still globally in peril," Putney said. "It has been popular for tourists around the world to see and the Keys draw many visitors for it."

Hundreds of Key deer were wiped out because of damage from Hurricane Irma in 2017. It also faced a parasite outbreak in 2016 from New World screwworms, which FWS reported had cut its then-population by about 10%.

Most of the Key deer habitat is less than 2 feet above sea level, leaving it vulnerable to climate change, according to the Center for Biological Diversity.

"Just the basis of sea level rise can wipe out most of their habitat," said Jaclyn Lopez, Florida director of Center for Biological Diversity. "With that in mind, how can you conclude that this species has a chance to survive without human intervention?"

The Trump administration on Monday announced that it will change how the 45-year-old Endangered Species Act is applied. Critics said that it will speed the loss of animals and plants.

Delisting the Key deer will enable further development that would further encroach on its habitat, said Diana Umpierre, a Florida-based organizer for the Sierra Club.

"Florida Key deer is an animal that people around the world absolutely love," Umpierre said. "The Key deer is to locals what the polar bear is to a lot of people."