TAMPA, Fla. - In a tiny house in Tampa Heights, there’s a window into a new life for women just out of jail.

"When they come to us, a lot of them say, 'I’ve lost my kids. I’ve lost everything.' or 'I’ve made some bad choices and everything I owned, everything I had is gone, and I just need some help," said Linda Walker, executive director of the Hillsborough House of Hope.

And for the ones willing to take it, this is their shot.

"The first thing we do is work on health issues. A lot of them haven’t seen a doctor in years," Walker said, "The second thing we do is help with their mental health because every woman that comes here has had issues with mental health -- anxiety, depression, bipolar." 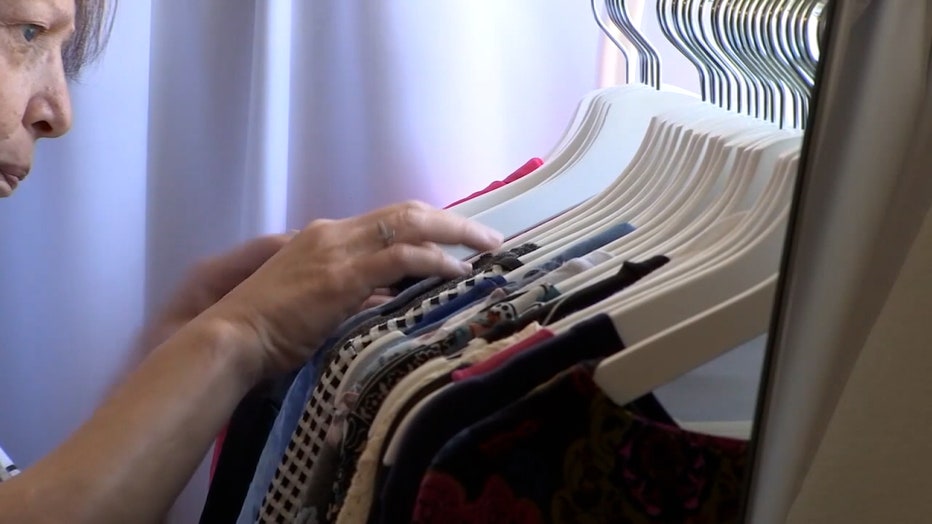 Woman shops for new clothes at Hillsborough House of Hope

For the better part of 30 years, Walker has been doing the work with these women at the Hillsborough House of Hope. The mission keeps growing and growing. And one of their biggest supporters has always been Tampa Police Chief Mary O’Connor.

"This gives them that second chance. It gives them time to re-acclimate themselves to society and be confident in themselves, to be grounded in faith and let them know that there’s so much positivity that can be turned from a negative moment," she said.

Long before she was chief, she believed in the mission and stood behind them as a mother and as an officer of the law.

"That defining moment doesn’t define the rest of their lives," she said.

She sees both sides and she knows the challenges.

"It takes a lot of hard work to get through everything. These ladies are just an example of what that hard work can achieve.

And she’s right behind them in their next big step. A plan for a housing complex with screened-in porches and a common area is in the works. A place these women could call their own.

It all started with Margaret Palmer, many years ago, praying with the women in the jail and then helping them reunite with their children and get back on their feet when they got out.

Linda Walker was one of the first women she met. Walker had been arrested and she lost everything in a moment. Today, she's celebrating 24 years clean and sober.

It was a friendship that stood the test of time.

"For years, Margaret and I prayed and held each others' hands. We thought someday we’re going to be able to build an apartment building," said Walker.

It’s exactly the kind of thing the city is working on, and a priority for Tampa Mayor Jane Castor, who has long supported the Hillsborough House of Hope.

"The housing crisis is such a problem to begin with that we need affordable housing for everybody but also in order to give these ladies the hope they need to move forward," said Chief O'Connor, "They need to have the courage and independence that they so desperately desire."

So, the plans are in the works. And if all goes well, they'll know more by Christmas. For Linda Walker, it's the next step in a mission that has become the joy of her life.

"So when those girls graduate after six months," she stopped short, laughing, "The first house, we call it the babe's house, but when they graduate they’ll have a chance to reunite with their children. And have an apartment to live life on life’s terms."

And that’s a hope we all can aspire to.