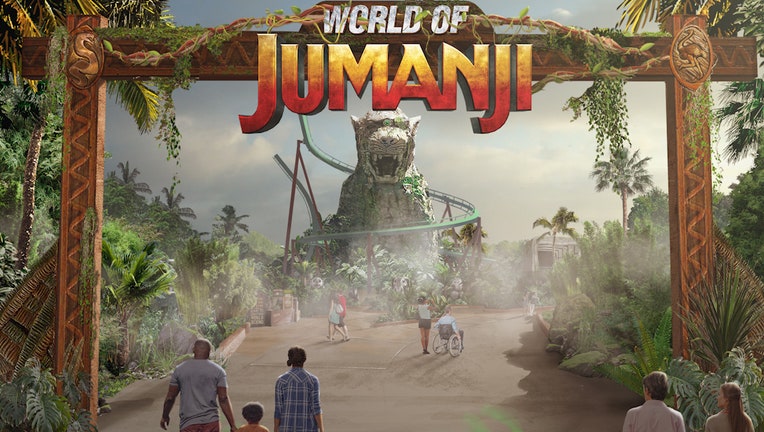 LONDON - A theme park modeled after the book and movie "Jumanji" is set to open in England next year.

Chessington World of Adventures Resort and Sony Pictures Entertainment announced the ‘World of Jumanji’ will open next spring.

"The impressive entrance portal, which is shrouded in the ominous and overgrown Jumanji jungle that dominates the development, creates the perfect immersive starting point for guests as they prepare to take on a whole host of challenges," the companies said in a joint news release.

The park will feature a 55-foot tall Jaguar Shrine. However, more details about rides and other attractions will be released at a later date.

Board game publishers say supply chain and manufacturing issues have forced them to raise prices.

"Jumanji" first came on the scene as a 1981 children’s picture book authored by Chris Van Allsburg. The book was about how a board game released wild animals and other jungle elements into the real lives of the players.

The book was later turned into a 1995 movie starring the late Robin Williams. He played Alan Parrish, who was trapped in the supernatural board game for 26 years. Every time a player took a turn, the board game would transform the player’s reality into a jungle environment in which they had to survive to win the game.

In the 2017 sequel— "Jumanji: Welcome to the Jungle"— the board game from the original movie was reimagined as a vintage video game, into which four teenagers are drawn. The teens became their video game avatars — played by Dwayne Johnson, Kevin Hart, Karen Gillan and Jack Black.

The franchise added a third movie, "Jumanji: The Next Level" in 2019. The movie's plot revolved around the disappearance of main character Spencer, who appeared in the previous "Jumanji" film, and his friends' journey to save him from the very real universe of the game.