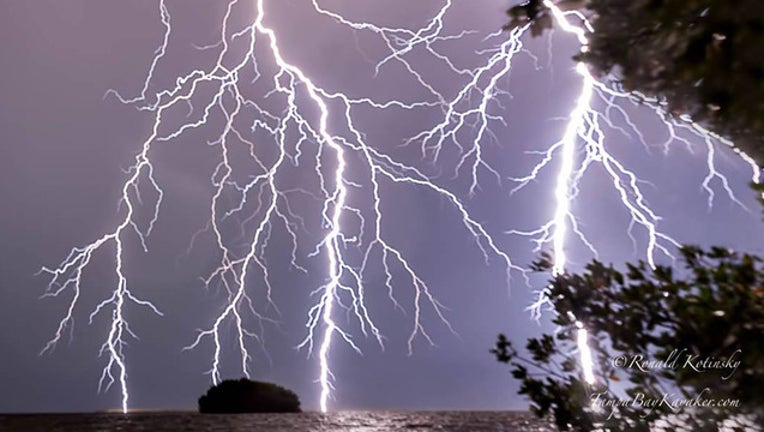 Researchers identified lightning bolts in Oklahoma and France as the longest on record and warn that their discovery could alter traditional thinking of when it's safe to go outside after a storm passes.

A 2007 storm in Oklahoma produced a lightning bolt nearly 200 miles (321.85 kilometers) long, while a 2012 storm in southern France produced a single flash that lasted 7.74 seconds. Both events were added Wednesday to a list of weather extremes kept by the World Meteorological Organization.

"We should be more aware of lightning if we can have lightning that can travel 200 miles," said Randy Cerveny, the WMO's spokesman on weather and climate extremes. "If thunder roars, go indoors."

Timothy Lang, a researcher at NASA's Marshall Space Flight Center in Huntsville, Alabama, said the record Oklahoma lightning bolt streaked from Tulsa, near the Arkansas border, to near the Oklahoma Panhandle. The bolt started at an altitude of 6 miles (9.66 kilometers) and reached the ground in a number of places, he said. A researcher in Colorado saw the streak, and Lang said its length could change thinking about safety after a storm.

"The lightning can start tens or hundreds of miles away and then come back to where you are," Lang said. "You have to be careful of where the lightning is coming to ground, even though the storm is past."

"These kinds of rules need to be looked at. It's going to depend on the kind of thunderstorm," Lang said. "You really need to know where it (lightning) is occurring. There could be a lower risk -- the lower the flash rate -- but it's not `no-risk."'

Cerveny said not all storms will have lightning as extreme as the Oklahoma and French storms. The Oklahoma storm was in a particularly large complex of bad weather that occurred very early on June 20, 2007. Lightning sensors on the ground tracked the bolt's path.

"Most lightning will strike within the 30-30 rule," he said. "The 30-30 rule is one that we still want to stress and make sure people are aware of ... but it does demonstrate that lightning can hit far from where the storm actually is."

The Oklahoma flash lasted a bit more than five seconds, while the French bolt doubled back on itself, extending its life to 7.74 seconds, said Cerveny, a professor of geographic sciences at Arizona State University.

The aerospace industry has an interest in lightning because it can endanger people in flight, while meteorologists can use spikes in lightning to judge a storm's severity, Lang said. "Oklahoma is a good place to study storms like this."