TAMPA, Fla. - One Lightning fan traveled far to watch his favorite team play, and got the surprise of a lifetime.

Eric Shear and his dad flew down from New York for the first game of the Stanely Cup semifinals – but they didn't come as Isles fans. Although the Tampa Bay Lightning lost, they stood outside Amalie Arena – dressed in Bolts blue – just after the game, waiting to catch a glimpse of the players. That's when they happened to catch Eric’s favorite defenseman driving out: Mikhail Sergachev.

When Eric spotted the Bolts player, he grabbed his Sergachev jersey and waved him down – and It worked.

Not only did Serg stop to say, "Hi," but he also exited his car and signed Eric’s Sergachev jersey. Sergachev even provided his own Sharpie. Then, he took a photo with the family. 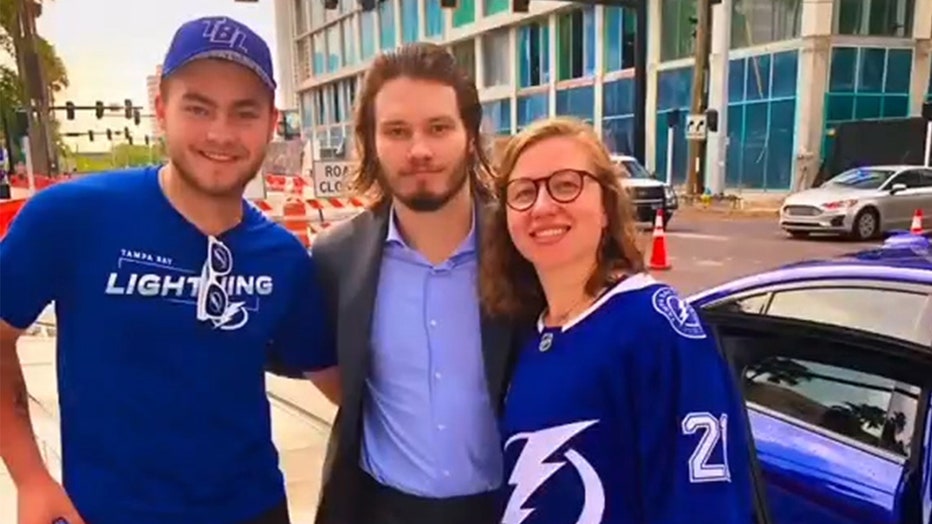 Eric's father captured the moment on video, and shared it on his TikTok account – which has nearly two million views.

"I grabbed the jersey out of my bag and I'm holding it up," he told FOX 13. "My dad was just hoping to get a wave, but he pulled over and went the extra mile. It was unbelievable."

Eric Shear may be one of the luckiest Bolts fans ever. Eric and his dad were outside Amalie Arena following Game 1 of the semifinals, when they happened to catch his favorite player leaving the venue. Mikhail Sergachev didn’t just stop to greet them, but he signed Eric’s jersey.

Days later, Eric is still beaming from the lucky encounter.

"He is a very classy player," he said. "For that to happen, it shows a lot, not just about his character but the organization as well."

Eric said he will hang the jersey on the wall, and won't ever wear it again. But, he's definitely going to buy another jersey so he can keep representing his favorite team, and player.