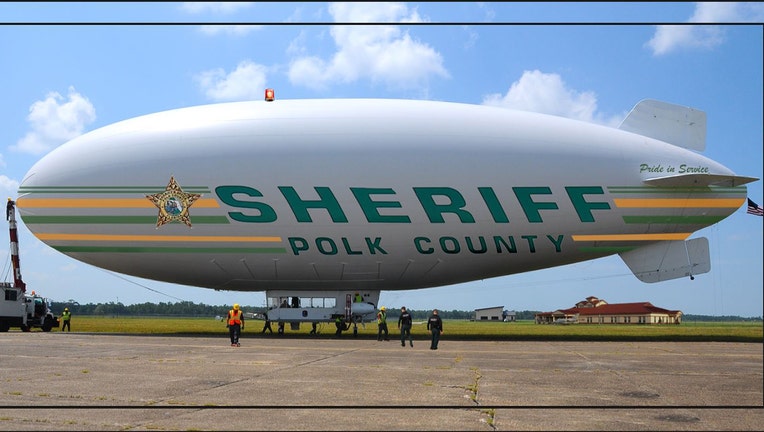 LAKELAND, Fla. - The Polk County Sheriff's Office announced they have a new method to help fight crime: a giant blimp – if only it was true.

In a joke fitted for April Fools' Day, the agency shared on social media that they seized the "2014 Zeppelin NT 07-101 semi-rigid airship" from drug dealers who were trying to discreetly transport $80,000 worth of heroin inside the blimp. Naturally, it was the agency's helicopter that pulled over the airship mid-flight.

The suspects named it "Aeroin."

"It was epic," according to the sheriff's office, adding it was the first time they ever conducted such a traffic stop. "Retired U.S. Naval pilot Tom Kazansky from Arcanum, Ohio moved down to Polk County just last year, but will come out of retirement to take the helm of the airship."

But just how did the Polk County Sheriff's Office select him?

"I was eating a Moon Pie and a 7-Up at the Bartow Executive Airport when I noticed Sheriff Judd standing next to the blimp," Kazansky explained. "I’ve heard a lot about the Sheriff and heard he loves saving taxpayers money, so I yelled out to him, ‘Yo, Sheriff Grady, I’ll fly that thing for ya, for free!’ and his face lit up."

According to one of the sheriff's office's spokespeople – described as "among the very best in the business, unusually attractive, and uniquely intelligent" – say it's another chance to monitor crime in Polk County from above. But, it will also be used for community events.

"Children will love this more than our K-9s," said the public information officer, who remained unnamed. "I mean, no offense to our K-9s, but this is a flippin’ blimp, man! I bet Hillsborough County doesn’t have a blimp!"

Last year, on April 1, the agency debuted their "G8R Unit," which comprised of an alligator named Godzilla.