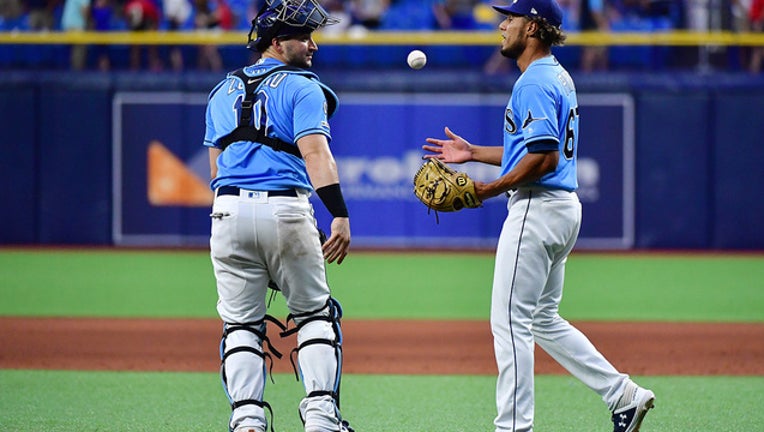 Ricardo Pinto of the Tampa Bay Rays tosses the ball after a 8-2 win over the Cleveland Indians at Tropicana Field on September 01, 2019 in St Petersburg, Florida. (Photo by Julio Aguilar/Getty Images)

ST. PETERSBURG, Fla. (AP) - This was no ordinary outing for Carlos Carrasco, and everyone at Tropicana Field knew it.

The popular Cleveland Indians pitcher nicknamed Cookie made his return to the mound from leukemia Sunday and was applauded by both teams in a touching scene during Tampa Bay's 8-2 victory that completed a three-game sweep.

Carrasco entered in the seventh inning for his first major league appearance since being diagnosed with a treatable form of leukemia in June. The right-hander received a standing ovation from the crowd, and players from both sides cheered while standing in front of their respective dugouts.

"Even the other team came out. My teammates, that was great because they have supported me from Day One to now," Carrasco said. "It's unbelievable."

Indians star shortstop Francisco Lindor went to the mound and hugged an emotional Carrasco, who was activated before the game following several minor league rehab outings.

"He told me, 'Welcome back, Cookie,'" Carrasco said. "'This is you. This is you right here. We are behind you. Just go and throw the ball.'"

Normally a starter, Carrasco is expected to pitch in relief for the Indians as they chase a playoff spot down the stretch. He worked one inning and gave up two hits, including Travis d'Arnaud's run-scoring single.

"It was a lot to think about," Carrasco said. "I was trying to hold the game right there, but in the end I gave up one run. But I'm healthy and it was go to the next pitch and go from there."

Lindor gave Carrasco the game ball from the third out of the seventh, a grounder by Joey Wendle, as the Indians headed off the field.

"Certainly, you saw the respect and the admiration that his teammates have for him," said Rays manager Kevin Cash, a former Cleveland coach. "Anytime you deal with a guy that has an illness and is able to recover and get back on the field like that, it's pretty special."

Charlie Morton earned his 14th win and d'Arnaud had two RBIs off the bench as Tampa Bay swept a critical series between postseason contenders. The Rays hold the first AL wild card by a half-game over the Indians, who are a half-game up on Oakland for the second spot.

"Naturally, we're going to pay attention a little bit to what Oakland is doing and what Cleveland is doing, but at the same time I think we've got to keep focus on what we're doing, what we can control," Morton said.

Nate Lowe hit a two-run homer for the Rays.

Tampa Bay went up 4-1 in the fifth on d'Arnaud's pinch-hit RBI double that drove in Eric Sogard. In 74 games with the Rays since being acquired from the Dodgers on May 10, d'Arnaud has 54 RBIs.

Tampa Bay took a 1-0 lead in a first inning that featured both highlight and blooper-reel plays.

Austin Meadows got a one-out double down the left field line when Jake Bauers stumbled and fell on the bullpen mound while fielding the ball. After Tommy Pham walked, Indians second baseman Mike Freeman made a diving catch on Ji-Man Choi's liner.

Wendle then lined an RBI single up the middle, and center fielder Oscar Mercado's throw toward the plate hit umpire Hunter Wendelstedt near second base.

Lowe made it 3-1 on his third-inning shot.

Bauers had a run-scoring double in the second and cut the deficit to 5-2 with an eighth-inning sacrifice fly.

Tampa Bay responded with a three-run eighth against Dan Otero to break the game open.

Indians: 2B Jason Kipnis, who left in the seventh inning Saturday due to right wrist discomfort, didn't play and will have his status re-evaluated by doctors Monday. ... Otero (right shoulder inflammation) was reinstated from the injured list.