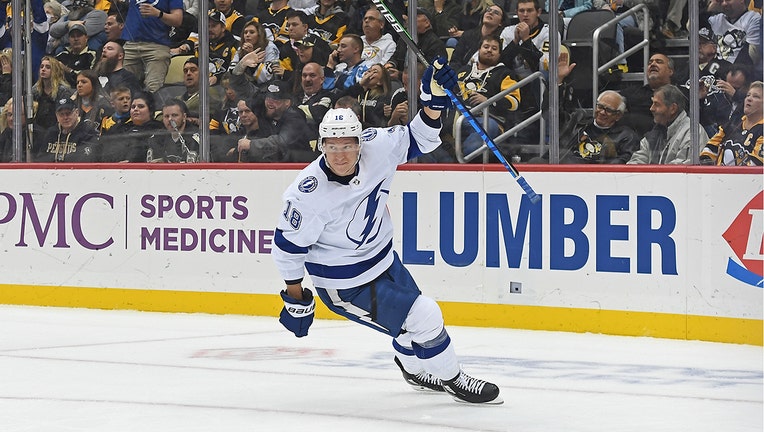 PITTSBURGH, PA - OCTOBER 26: Ondrej Palat #18 of the Tampa Bay Lightning reacts after scoring a goal in the second period during the game against the Pittsburgh Penguins at PPG PAINTS Arena on October 26, 2021 in Pittsburgh, Pennsylvania. (Photo by J

PITTSBURGH, PA - Ondrej Palat and Ryan McDonagh scored 10 seconds apart in the second period and the Tampa Bay Lightning picked up their first regulation victory of the season with a 5-1 win over Pittsburgh on Tuesday night.

Brayden Point's backhand 31 seconds into the second gave the Lightning their first lead in regulation this season as Tampa Bay bounced back from a lopsided loss in Buffalo on Monday.

Mikhail Sergachev and Alex Killorn added third-period goals for Tampa Bay, and Andrei Vasilevskiy stopped 28 shots for the Lightning, who won in Pittsburgh for just the fourth time in their last 17 visits.

Tuesday was the Penguins' first regulation loss of the season. Jason Zucker scored in the third period to spoil Vasilevskiy's bid for a shutout. Tristan Jarry made 26 saves for the Penguins, who fell to 3-1-2 when the two-time defending Stanley Cup champion Lightning hit the gas midway through the game.

Pittsburgh spoiled the Lightning's celebratory vibe two weeks ago, beating them 6-2 in the season-opener after Tampa Bay raised its 2021 Stanley Cup banner to the rafters.

But the Lightning restored a bit of order Tuesday to their shaky start to the 2021-22 season, playing with an edge it has lacked early on. McDonagh and Corey Perry both mixed it up with Pittsburgh's Sam Lafferty in the first period, with Lafferty and Perry both going off for fighting after a particularly contentious exchange.

Pittsburgh appeared to take the lead with 5:16 left in the first period when Brock McGinn followed his shot from the right circle and raced to the net to tap in the rebound. The goal was waved off because officials blew the whistle, even though the puck never stopped moving.

Pittsburgh's responsible defensive play — one of the major reasons the Penguins have held their own early on despite playing without injured stars Sidney Crosby and Evgeni Malkin — briefly vanished in the second and the Lightning pounced.

Tampa Bay took its first regulation lead some 200 regulation minutes into the season when Sergachev's long flip pass set up a 2-on-1 for Point and Anthony Cirelli. Point ripped a backhand high over Jarry's shoulder.

The Penguins, who were also missing center Jeff Carter and defenseman Kris Letang after testing positive for COVID-19, made a serious push to tie it midway through the period thanks to extended pressure by the checking line of Lafferty, Brian Boyle and Dominik Simon. Vasilevskiy held firm and shortly thereafter Palat broke in alone on beat Jarry from the slot to make it 2-0 11:18 into the second.

McDonagh broke it open 10 seconds later when the Lightning controlled the ensuing faceoff and Steven Stamkos skated behind the Pittsburgh net, giving McDonagh enough room to get open for a one-timer that gave the Lighting an opportunity to relax and play from in front for the first time in a long time.