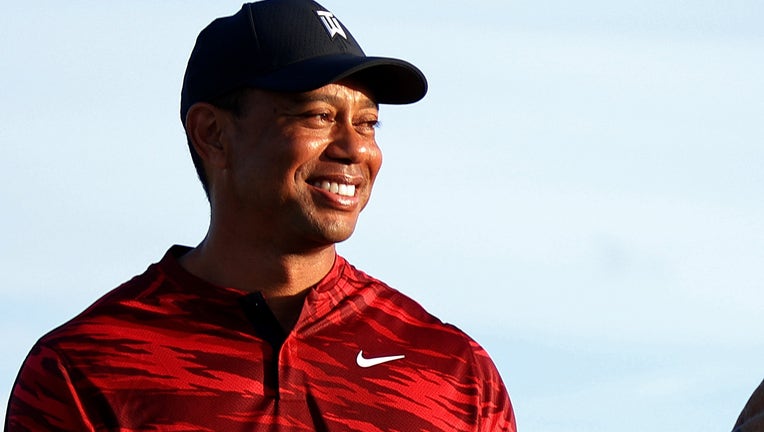 Tiger Woods of the United States looks on during the trophy ceremony after the final round of the Hero World Challenge at Albany Golf Course on December 05, 2021 in Nassau, . (Photo by Mike Ehrmann/Getty Images)

ORLANDO, Fla. - Ten months after his right leg was badly damaged in a car crash, Tiger Woods is returning to competition next week with 12-year-old son Charlie in the PNC Championship.

"Although it’s been a long and challenging year, I am very excited to close it out by competing in the PNC Championship with my son Charlie," Woods tweeted. "I’m playing as a Dad and couldn’t be more excited and proud."

It will be his first competition, even in a tournament Woods described last week as the "hit-and-giggle" variety that he can play, since he and his son tied for seventh a year ago in the unofficial event that pairs family members.

The tournament was holding a spot for Woods, and he fueled speculation he might play the Dec. 18-19 event at the Ritz Carlton Golf Club Orlando when he took full swings with driver on Saturday and Sunday during his Hero World Challenge in the Bahamas.

"We have been liaising with Tiger and his team for some time and are delighted that he has now decided to make his return to competitive golf at the PNC Championship," said Alastair Johnston of IMG, the executive chairman of the event.

Woods was driving to a Los Angeles course for a television shoot on Feb. 23 when police say he was driving about 85 mph along a winding, coastal suburban road. The SUV crashed through a median and plunged down a hill.

Doctors said he shattered the tibia and fibula bones in his right leg in multiple locations. Those were stabilized by a rod in the tibia. A combination of screws and pins were used to stabilize additional injuries in the ankle and foot.

Tiger Woods to make return to competition in Orlando

Ten months after his right leg was badly damaged in a car crash, Tiger Woods is returning to competition next week with 12-year-old son Charlie in the PNC Championship in Orlando. PGA star Chris DiMarco shared his thoughts on Tiger's return to the course and the one thing everybody agrees on: you don't want to bet against Tiger Woods.

Woods said last week that amputation was considered. He declined to discuss specifics of the crash, saying only "you can read about all that there in the police report."

The PNC Championship was formerly known as the Father-Son Challenge until it changed the title to be more inclusive of family members. For the first time in its 24 years, the tournament has a current No. 1 player in the field, Nelly Korda, who will be playing with her father Petr, a former Australian Open tennis champion. 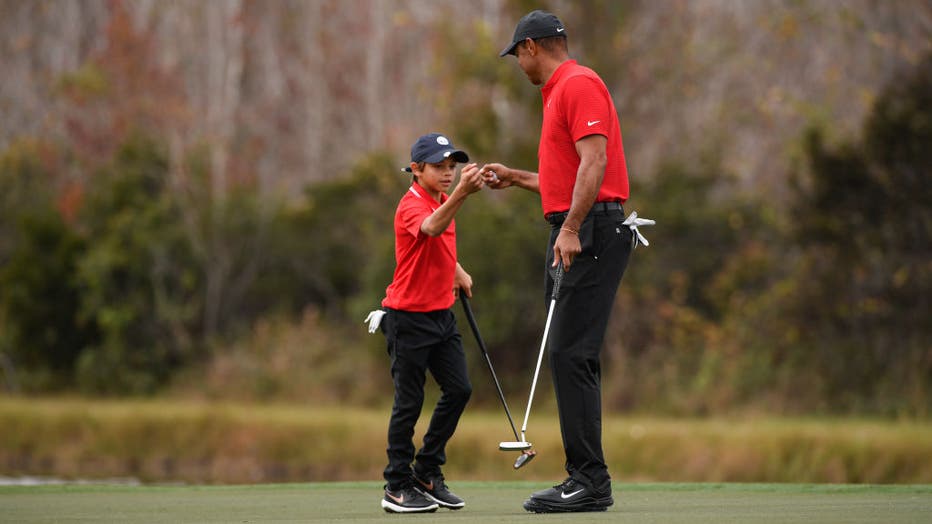 ORLANDO, FL - DECEMBER 20: Charlie Woods fist bumps with his father, Tiger Woods, on the 14th green during the final round of the PGA TOUR Champions PNC Championship at Ritz-Carlton Golf Club on December 20, 2020 in Orlando, Florida. (Photo by Ben Ja

Lee Trevino is playing again and has never missed the tournament since it began in 1995. Justin Thomas returns as the defending champion with his father, Mike, a longtime PGA professional.

Still, this becomes all about Woods inside the ropes, hitting shots that count toward a score. A year ago, it was his last event before a fifth back surgery, not as serious as the previous ones. Toward the end of the second round, he was not hitting some tee shots because his son played from a forward tee and was getting it out there farther than Woods could have hit it.

Fans are returning to the Florida course, and it already is close to a sellout because organizers limit ticket sales to preserve the intimate nature of the event.