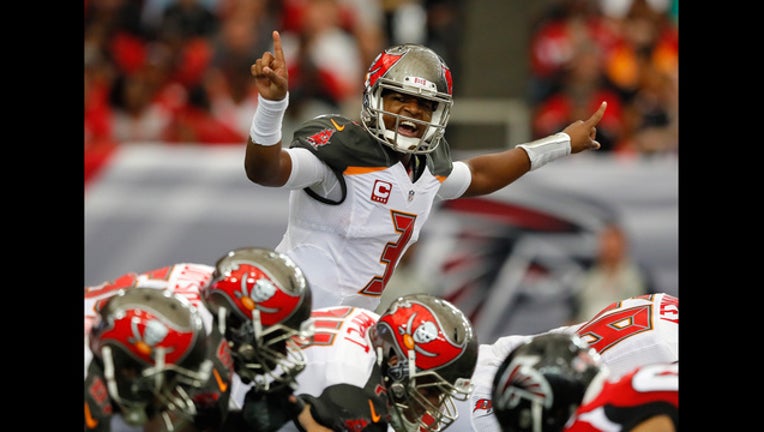 ATLANTA, GA - SEPTEMBER 11: Jameis Winston #3 of the Tampa Bay Buccaneers calls out to the offense against the Atlanta Falcons at Georgia Dome on September 11, 2016 in Atlanta, Georgia. (Photo by Kevin C. Cox/Getty Images)

ATLANTA (AP) - Dirk Koetter got a game ball after his debut as an NFL head coach.  Jameis Winston made it all possible.

The second-year quarterback bounced back from an early interception to throw four touchdowns passes, leading the Tampa Bay Buccaneers to a 31-24 victory Sunday over the Atlanta Falcons in a season-opening matchup between NFC South rivals.

"Good guys win," quipped Koetter , still dripping with Gatorade after a victory splashing. "Let's do it 15 more times this year."

That might be far-fetched, but at least the Bucs can boast of a winning record for the first time since the 2012 season, when they started 6-4.

Winston presented his new coach with the game ball.

"It was very important that we made him feel the moment was special, not only for him but for us," the quarterback said.

Winston was 23 of 33 for 281 yards, using just about every weapon at his disposal. He hooked up with receiver Mike Evans, running back Charles Sims III and tight ends Austin Sefarian-Jenkins and Brandon Myers on scoring plays.

The Falcons grabbed a 10-3 lead late in the first quarter after Winston's pass for Vincent Jackson was picked off by Desmond Trufant, who returned it 13 yards to the Tampa Bay 9. Jackson broke outside on the route, while Winston's throw went to the inside.

But Winston shook off that miscue with a 4-yard TD pass to Myers, and went to work again with less than two minutes to go in the first half.

After a third-down conversion to Jackson, Winston dumped off a short throw to Sims, who did the rest. He faked out two defenders — cutting right while they both tumbled the turf — and broke two more tackles on the way to a 23-yard touchdown that put Tampa Bay ahead for good.

The Buccaneers scored on their first two possessions of the second half, pushing the lead to 31-13.

The Falcons didn't quit in their final season opener at the Georgia Dome before moving next door to $1.4 billion Mercedes-Benz Stadium.

Matt Ryan , looking to bounce back from a disappointing 2015 season in which the Falcons missed the playoffs for the third year in a row, hooked up with Julio Jones on a 25-yard touchdown and tacked on a two-point conversion.

But Atlanta wound up settling for three field goals by Matt Bryant.

"We had four trips into the red zone and came away with one touchdown," Ryan said. "We've got to be much better."

"It's weird to see the people on the other side," Koetter said. "But that's the nature of the NFL."

Smith was the winningest coach in Falcons history, nearly leading Atlanta to the Super Bowl during the 2012 season. That was followed by two straight losing seasons and his firing.

Tampa Bay backup linebacker Jacquies Smith was carted to the locker room with a right knee injury and didn't return. He was hurt covering a punt in the first quarter.

Some big penalties cost the home team in the third quarter. Offensive guard Chris Chester was called for unnecessary roughness, knocking the Falcons out of field-goal range.

On Tampa Bay's ensuing possession, cornerback Robert Alford was also flagged for a personal foul after the Falcons had forced an incomplete pass on third down. The Bucs went on to score a touchdown.

WR Mohamed Sanu got off to a strong start with the Falcons. He set up a field goal with a 59-yard grab and hauled in a 5-yard TD pass, finishing with five receptions for 80 yards. He also caught a two-point conversion. ... RB Devonta Freeman was held to 20 yards rushing on 11 carries. ... Evans had five catches for 99 yards.

Buccaneers: Tampa Bay travels to the desert to face the Arizona Cardinals next Sunday.

Falcons: Atlanta also heads west next Sunday to meet the Oakland Raiders, who opened with a 35-34 win over New Orleans.