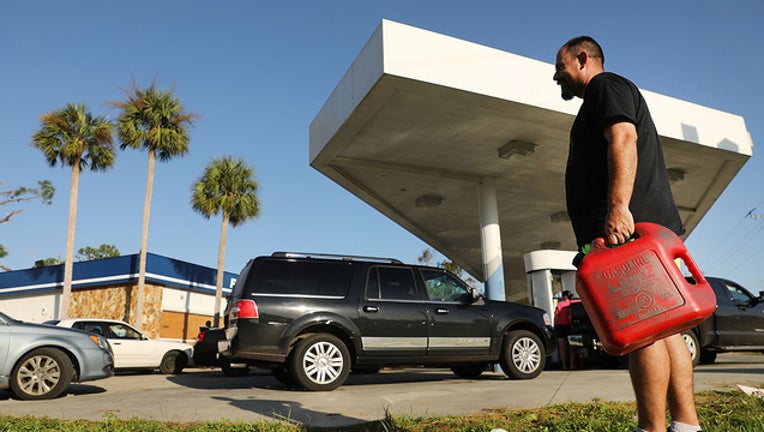 A man waits over three hours to purchase gas in rural Naples two days after Hurricane Irma swept through the area. (Photo by Spencer Platt/Getty Images)

TALLAHASSEE (NSF) - Evacuees already struggling to return home because of heavy traffic and overworked fuel supplies are being advised to consider alternative routes, as flash flooding could close sections of major roads including Interstate 75 north of Gainesville.

Meanwhile, nearly 3.8 million homes and businesses remained without electricity Wednesday as repair crews, working around the clock, have reconnected almost 3 million other customers since Hurricane Irma tore into the Sunshine State.

The river under the interstate rose 15 feet --- to 55 feet --- from Tuesday to Wednesday after Irma's heavy rains soaked the northern part of the state.

“If the river rises to an unsafe level, the bridge will be impassable both northbound and southbound, and would be closed immediately,” Department of Highway Safety and Motor Vehicles spokeswoman Beth Frady said in a prepared statement. “Floridians that are traveling should avoid the area if possible.”

State Road 26 in eastern Alachua County has already been closed in both directions at Hatchett Creek due to flooding. The problems in Alachua County came as Jacksonville have seen major flooding since Monday in areas around the St. Johns River.

The state departments are working with Google Maps, the Georgia Department of Transportation and other parts of the transportation industry to communicate with motorists about potential reroutes, such as advising motorists traveling south into Florida to take Interstate 10 east to Interstate 95 in Jacksonville.

MAP: Flooding may close portion of I-75 as Florida evacuees return

Meanwhile Wednesday, electric utilities continued racing to get the lights back on across Florida.

Florida Power & Light company is working to get power back by the end of the weekend to most of its customers in eastern parts of Florida and by Sept. 22 for its customers in western counties, which include all or parts of Manatee, Hardee, Sarasota, DeSoto, Charlotte, Lee, Hendry, Collier and Monroe.

“At the end of the day we're going to get everybody's lights on,” FPL spokesman Rob Gould said. “It's going to be a bit frustrating for some people, and we know that.”

The company, which had more than 4.4 million of its 5 million customer accounts impacted by Irma, still had about 1.9 million homes and businesses without power at midday Wednesday.

Gould said the company was encouraged that damage across its western service area wasn't as bad as anticipated.

Gould said maybe “a couple hundred” poles were knocked down by Irma. By comparison, Hurricane Wilma in 2005 knocked over thousands of poles. Also, the company doesn't have to rebuild substations as was the case after the 2005 storm, which wasn't as strong as Irma.

“The investments we made on behalf of our customers are benefiting us and more importantly benefitting our customers,” Gould said.

Duke Energy reported that 515,892 customers had electricity restored by early Wednesday, while another 878,046 remained without power.

The company has projected that a portion of its service area including Pinellas and Pasco counties is expected to be restored by the end of Friday, while remaining customers in all but Hardee and Highlands counties should be reconnected by the end of Sunday.

The company has not given restoration dates for the two inland counties.

Tampa Electric noted Wednesday morning that 40 percent of the 425,000 customers who lost power have had service restored.

The Florida Municipal Electric Association said 343,316 municipal-utility customers remained without power Wednesday, while electricity had been restored to more than 500,000 customers. The largest number of customers without power, 112,077, were in Duval County.

Meanwhile, Gov. Rick Scott spent the morning on a boat tour of storm-ravaged Middleburg in Clay County. He was scheduled to go to Homestead and later Key West, where water and sanitation remain issues. Residents have yet to be allowed back into the lower Keys, which took the first of Irma's two Florida landfalls on Sunday.

President Donald Trump, in tweeting that he will be in Florida on Thursday, tied hurricane relief to tax cuts and tax reform.

“I will be traveling to Florida tomorrow to meet with our great Coast Guard, FEMA and many of the brave first responders & others,” Trump tweeted early Wednesday.

“With Irma and Harvey devastation, Tax Cuts and Tax Reform is needed more than ever before. Go Congress, go!,” Trump added.

Details of Trump's visit had not been posted.