DC fire and rescue crews freed a worker who had been trapped after a building collapsed in Northwest on Thursday.

WASHINGTON - A worker who had been trapped for around 90 minutes after a building collapsed in Northwest D.C. on Thursday has been freed from "under about three floors of debris," according to fire officials.

Five workers in all were rescued on Thursday after a building collapsed in Northwest D.C. - including one worker who was reportedly trapped under 'three feet of debris.'

D.C. fire and rescue officials said the worker is "conscious," but they did not elaborate on the extent of his injuries.

Four other workers were pulled from the rubble and taken to a local hospital shortly after crews arrived at the scene in the 900 block of Kennedy Street, Northwest at 3:30 p.m. Officials say their injuries are not life threatening.

Firefighters and emergency crews responded to the scene in Northwest D.C. after a building collapsed, trapping one person and injuring several others.

The structural collapse of the five-story building occurred as severe weather swept through the metropolitan region, including severe thunderstorms in the District proper.

Fire and rescue workers needed to use machines to clear away the debris and find the worker, but they were able to make contact with him while he was trapped.

Fire and rescue officials say they responded to the scene "at the height of the storm."

D.C. officials are trying to determine what prompted the collapse, however, and they noted that they are in the preliminary phase of their investigation.

DC fire and rescue crews are at the scene after a building collapsed on Thursday - injuring several people, and trapping at least one. 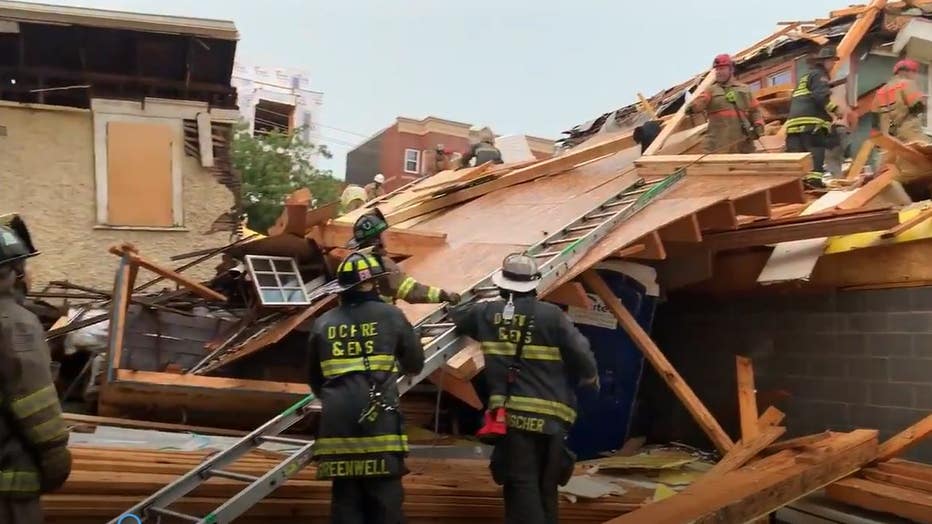