The investigation found that 95 percent were contaminated with one or more of four toxic heavy metals, including arsenic, lead, cadmium and mercury.

CINCINNATI - A recent investigation found that 95 percent of baby foods tested contained one or more toxic chemicals, which can negatively affect a young child’s brain development.

The report, released Thursday and commissioned by Healthy Babies Bright Futures, stated that tests were conducted of 168 baby foods from major food brands in the U.S. The investigation found that 95 percent were contaminated with one or more of four toxic heavy metals — arsenic, lead, cadmium and mercury.

One in four contained all four heavy metals.

Healthy Babies Bright Futures, an alliance of nonprofit organizations that aims to reduce babies’ exposures to toxic chemicals in the first 1,000 days, said the contaminants can alter the developing brain and erode a child’s IQ, even in the trace amounts found in food.

The investigation found that four out of the seven infant rice cereals tested contained a toxic form of arsenic in excess of the Food and Drug Administration’s proposed action level of 100 parts per billion. One out of every five baby foods tested had over 10 times that amount.

Rice-based products, sweet potatoes and fruit juices were found to have the highest risk for neurotoxic harm, the report states. 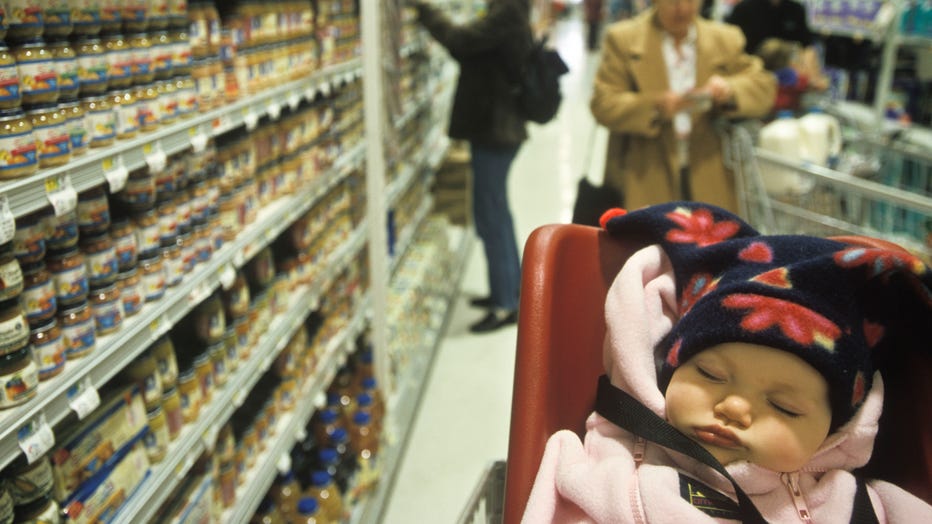 A baby sleeps in a shopping cart in front of baby food at a grocery store in a file image. (Photo by James Leynse/Corbis via Getty Images)

Healthy Babies Bright Futures pointed out that the four toxic metals identified in the investigation are found in all food, not just baby food, occurring naturally or from pollution in the environment. But the organization said the presence in baby food raises “unique concern” because babies are more susceptible to the toxic impacts.

“Arsenic, lead and other heavy metals are known causes of neurodevelopmental harm,” said Dr. Philip Landrigan, a pediatrician and director at the Schiller Institute for Integrated Science and Society at Boston College. “Low level exposures add up, and exposures in early life are especially dangerous. The cumulative impact of exposures is what makes this a significant concern that demands action.”

Baby food companies seem to be paying attention to health advocates, however. The report found that current arsenic contamination levels in rice cereal and juice are 37 and 63 percent lower than a decade ago due to companies reducing metal levels to comply with draft FDA guidance.

"When FDA acts, companies respond. We need the FDA to use their authority more effectively, and much more quickly, to reduce toxic heavy metals in baby foods," said study author Jane Houlihan, a research director for Healthy Babies Better Futures.

Safer baby food alternatives include rice-free snacks, non-rice cereal such as multi-grain and oatmeal cereals, other soothing teething foods like a frozen banana or chilled cucumber, and a variety of vegetables, the report states.