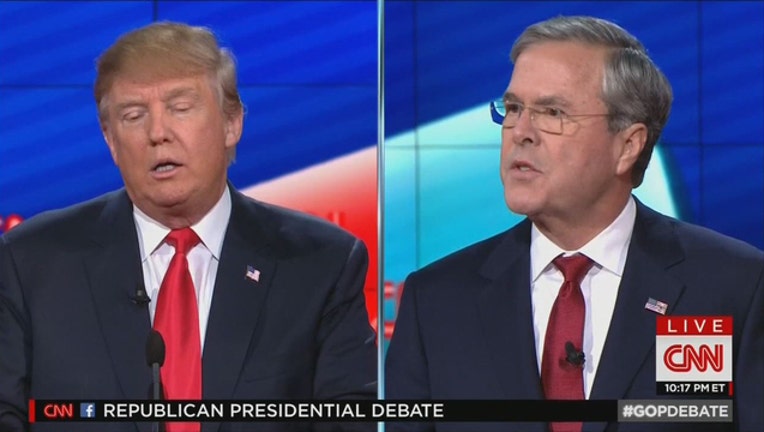 LAS VEGAS (AP) — Jeb Bush finally delivered a powerful debate performance. But it may not matter.

The former Florida governor repeatedly took the fight to front-runner Donald Trump in Las Vegas Tuesday night as the Republican Party's 2016 class met on the debate stage for the last time this year.

Bush called the billionaire businessman "the chaos candidate," insisted Trump couldn't "insult his way to the presidency," and dismissed Trump's proposal to block all Muslims from entering the country as dangerous and "not serious."

Yet with little more than six weeks before voting begins, Bush is struggling for relevancy in a presidential election that has begun to leave him behind. Trump, meanwhile, beat back repeated attacks from his Republican rivals in the primetime faceoff to ensure a central role in the 2016 contest, fueled by deep anti-establishment frustration among the GOP's angry electorate.

Trump seized on Bush's dismal standing in recent polls and largely shrugged off the criticism.

"I know you're trying to build up your energy, Jeb, but it's not working very well," Trump countered.

"Donald, you're not going to be able to insult your way to the presidency. That's not going to happen," Bush responded.

The exchange was recorded as the "top social moment" of the debate on Facebook, according to the social media organization. It was the kind of moment Bush supporters had been desperate for in the year's first four primetime debates. That it took several months to materialize highlights Bush's weakness as a candidate, despite having every advantage money could buy.

It wasn't supposed to happen this way.

Exactly one year ago, Dec. 16, 2014, Bush shook up the political world by declaring he would actively explore a presidential bid. Backed by much of the Republican establishment, the son and brother of former presidents quickly amassed a mountain of campaign cash — more than $100 million — that was supposed to scare off potential rivals and offer an easier path to his party's presidential nomination.

Bush's allies have spent more than a quarter of their massive fundraising haul running television ads for three consecutive months. Still, his weak poll numbers haven't moved. And Trump, who has spent by far the least of the major presidential candidates, is firmly entrenched as his party's front-runner.

With tens of millions remaining in the bank behind Bush, however, there were modest signs of optimism after Tuesday night's debate performance.

"I think it's interesting that none of the other candidates saw fit to challenge Mr. Trump," Bush campaign manager Danny Diaz said after the debate. "From our perspective, we wanted to highlight the difference between the candidates: one who is prepared, one who has a depth of knowledge for the job and one whose erratic behavior and reckless rhetoric raises real questions."

Yet as the crowded 2016 Republican contest continues, Bush increasingly seems like a candidate whose time has passed.

As was the case Tuesday in Las Vegas, Bush's rivals have adopted a more measured approach with Trump recently, declining to attack him too aggressively while embracing the anti-establishment sentiment fueling his candidacy. Bush, however, continues to take direct aim at Trump and his brash policies.

Most of the Republicans on the debate stage, for example, disagreed with Trump's recent call to block all Muslims from entering the United States to help combat terrorism. But no one condemned the plan more pointedly than Bush.

"Look, this is not a serious proposal. In fact, it will push the Muslim world, the Arab world, away from us at a time when we need to re-engage with them to be able to create a strategy to destroy ISIS," Bush charged, calling Trump "a chaos candidate." ''And he'd be a chaos president. He would not be the commander in chief we need to keep our country safe."

At the same time, Florida Sen. Marco Rubio showed little sign he was concerned about Bush, considered his chief Republican opponent not long ago. Rubio all but ignored his Florida rival and instead aimed his most pointed barbs at Texas Sen. Ted Cruz.

With precious little time remaining before voting begins, the Cruz-Rubio dynamic seems far more likely to define the next phase of the contest than a Bush comeback.

And Trump seems more than happy to engage with Bush.

"This is a tough business to run for president," Bush charged early on in the debate.

"Oh, I know. You're a tough guy, Jeb. I know," Trump slapped back before pointing out Bush's sharp fall from front-runner status.

"You're moving over further and further," Trump continued. "Pretty soon you're going to be off the end."