President Biden says administration plans to reduce gun violence through revoking licenses to sell guns for those who use loopholes. The President spoke at the White House amid a surge of violence seen in major cities in the country.

The president delivered remarks amid a rise in violent crimes and homicides across the nation. Biden said officials are bracing for a time when violence generally increases in the summer months.

"Crime historically rises during the summer. As we emerge from this pandemic, with the country opening back up again, the traditional summer spike may be more pronounced than it usually would be," Biden said.

Biden says his administration plans to revoke licenses to gun sellers who use legal loopholes in order to avoid required background checks.

He said he is also moving to prosecute those who willfully sell weapons to a person who is not permitted to own one.

Biden added that $350 billion in federal stimulus money will be used to fund police departments in cities with high crime rates. 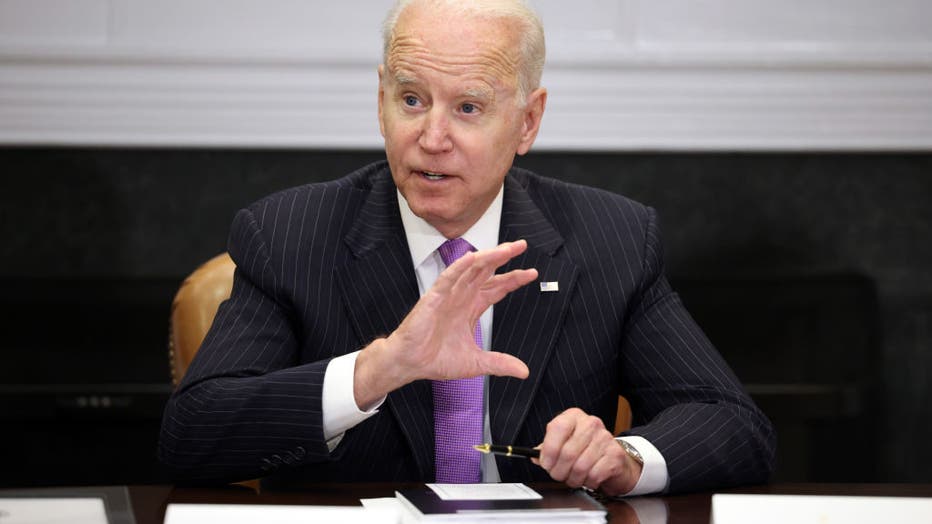 Crime rates have risen after plummeting during the initial months of the coronavirus pandemic, creating economic hardship and anxiety. Biden’s plan focuses on providing money to cities that need more police, offering community support and most of all cracking down on gun violence and those supplying illegal firearms.

"These merchants of death are breaking the law for profit," Biden said. "If you willfully sell a gun to someone who’s prohibited, my message to you is this: We’ll find you and we’ll seek your license to sell guns. We’ll make sure you can’t sell death and mayhem on our streets."

The White House said the government’s new strategy will tackle five areas, including an effort to stem the flow of firearms used to commit crimes and supporting local law enforcement agencies with more federal money and tools.

The administration said it also seeks to invest in community violence intervention services, expand summer programs, work opportunities and other services that support teenagers and younger children, as well as focus on helping those who were formerly incarcerated re-enter their communities.

Biden, who has a long legislative record on fighting crime as a senator, has been clear that he is opposed to the "defund the police" movement, which has been effectively used against other Democrats to cast them as anti-law enforcement.

But the president is also is trying to boost progressives' efforts to reform policing after a year of mass demonstrations and a national reckoning on racial injustice sparked by the police killing of George Floyd and other Black people across U.S. And while combating crime and reforming the police don't have to be at odds with each other, the two efforts are increasingly billed that way.

"Dealers that fail to comply with their obligations under the law create risks for all of us," the White House said in a statement ahead of the president’s remarks.

The president has already announced several executive actions on gun control, including cracking down on "ghost guns," homemade firearms that lack serial numbers used to trace them and that are often purchased without a background check. But he is limited without Congress.

The House passed two bills requiring background checks on all firearm sales and transfers and allowing an expanded 10-day review for gun purchases. That legislation faces strong headwinds in the Senate, where some Republican support would be needed for passage.

In the meantime, Biden is also seeking increased transparency on gun data and better coordination among states, and he will push Congress for more money for the Bureau of Alcohol, Tobacco, Firearms and Explosives, the agency responsible for enforcing federal gun laws and regulating gun dealers. The Justice Department is also launching strike forces in Chicago, New York, Los Angeles, San Francisco and Washington, D.C. to help take down illegal gun traffickers, building on an initiative begun last month.

Police officials around the country have said they are struggling with increasing crime and continued tensions between police and communities, and some say their calls for support aren't answered as they take the blame for the spike.

"Many of us — if not most of us — are seeing a rise in crime, while at the same time, we’re hearing calls for reform," Baltimore Police Commissioner Michael Harrison said of cities in remarks Tuesday at a forum on policing. "And some of those calls are to the extreme of dismantle and defund ... while all of the same time we’re sworn to protect the people."

Biden highlighted how the $350 billion, part of the $1.9 trillion COVID-19 relief package passed earlier this year, can be used to hire more police, pay overtime, prosecute gun traffickers and invest in technology and equipment to allow law enforcement to more effectively respond to gun violence.

Officials told the Associated Press that the White House hoped cities would also choose to use the money for alternatives to policing and to invest in community policing models.

"(Community violence intervention) programs are effective because they leverage trusted messengers who work directly with individuals most likely to commit gun violence, intervene in conflicts, and connect people to social, health and wellness, and economic services to reduce the likelihood of violence as an answer to conflict," the White House statement said.

While crime is rising — homicides and shootings are up from the same period last year in Chicago; Los Angeles; Minneapolis; Portland, Oregon; Baltimore; Baton Rouge, Louisiana; and Houston — violent crime overall remains lower than it was a decade ago or even five years ago. And most violent crimes plummeted during the first six months of the coronavirus pandemic, as people stayed indoors and away from others.

Crime started creeping up last summer, a trend criminologists say is hard to define and is likely due to a variety of factors such as historic unemployment, fear over COVID-19 and mass anger over stay-at-home orders during the pandemic. Public mass shootings have also made an alarming return.

The president on Wednesday called on states and cities to use $122 billion in funding from the relief package to provide and expand summer education and enrichment programs for school children, who are often both targets and perpetrators of violence, as well as summer hiring programs for teens.

Labor Department funding will be used to provide pre-apprenticeship jobs for youths and help formerly incarcerated adults and young people in 28 communities get work.

This story was reported from Cincinnati and Los Angeles. The Associated Press contributed.