TAMPA, Fla. - In a closed-door virtual event, the Democratic nominee for president came to Tampa to make his case for the military vote.

Joe Biden started off with an attack on President Donald Trump.

“Quite frankly, it makes me very upset the way he gets in front of a camera and crows about how much he does for veterans, and then turns around and insults our fallen heroes and service-members when the camera is off,” Biden said.

The former vice president was referring to a report in The Atlantic that quoted four anonymous sources as saying President Trump spoke disparagingly of U.S. service-members during a 2018 trip to France to commemorate the 100th anniversary of WWI -- a report that President Trump has forcefully denied. 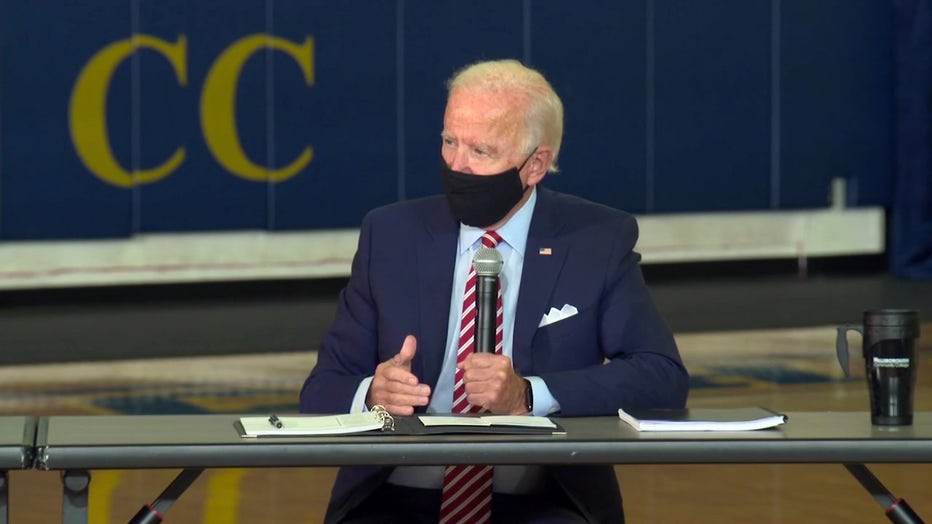 “Nowhere are his faults more glaring or more offensive at least than when it comes to his denigration of our service-members,” Biden said.

The Democratic nominee sat alongside active duty service members and veterans today, to speak on a range of topics – from hiring military spouses, to veteran suicide.

“It hit home personally to me,” one veteran told Biden. “I had a young Marine who went to a VA hospital, told them he was going to commit suicide if they didn’t help him. And unfortunately they didn’t, he walked out and ended up committing suicide.”

Biden has vowed in the past to invest more in mental health for the military.

Outside before the event, one man who identifies himself as a Republican told FOX 13 why he's voting for Biden.

“He lost me when he disrespected the war hero, John McCain,” he said.

Crowds from both sides gathered to show support for their respective candidates outside of the community college.

Nationally, Biden leads President Trump by five points among likely voters, according to the most recent FOX News poll, but when looking specifically at Florida, the Sunshine State and its 29 electoral votes appear to be up for grabs.

The latest Real Clear Politics poll shows the two candidates in a virtual lock with Biden currently ahead by 1.2 points in Florida. That is the same margin that gave Florida to Trump in 2016.