A student gunman opened fire Thursday at a Southern California high school, killing two students and wounding three others before he was captured in grave condition after shooting himself in the head, authorities said.

SANTA CLARITA, Calif. - A student gunman opened fire Thursday at a Southern California high school, killing two students and wounding three others before he was captured in "grave condition" after shooting himself in the head, authorities said.

Previously, a Los Angeles County sheriff's official on scene said a third student had died but the sheriff's department later clarified that two students were deceased.

A 14-year-old boy was treated and released from another hospital, authorities said.

Two girls, ages 14 and 15, were each in good condition after being treated for gunshot wounds, according to Patricia Aidem, a spokeswoman for Providence Holy Cross Medical Center.

Another victim who was not injured by gunfire was transported to Olive View-UCLA Medical Center and was expected to be released, hospital spokesperson Lois Ramirez said.

The alleged shooter was in grave condition, according to officials.

Video of the shooting showed that the last thing the assailant did was shoot himself in the head with the final bullet in the .45-caliber handgun, Wegener said. The weapon was empty when it was recovered.

At the time, students were “milling around” and greeting each other in an outdoor quad area, Wegener said. Surveillance video showed the shooter standing still while “everyone is active around him.”

“He just fires from where he is. He doesn’t chase anybody. He doesn’t move,” Wegener said.

Sheriff Alex Villanueva said the shooter was a student at the school but did not identify him.

No details were immediately released on a motive.

"We have not yet established a motive or a nexus between the subject and his victims, other than to say they were all students at the high school together," sheriff’s homicide Capt. Kent Wegener said at a press conference.

Villanueva said a biography on an Instagram account believed to belong to the teen contained the posting: “Saugus, have fun at school tomorrow.”

The message was discovered Thursday morning after the shooting. It was unclear when it was made and by whom, the sheriff said.

It was later removed, and investigators do not know who made the change, Wegener said.

Investigators were searching the suspect’s home. Wegener said the sheriff's department had not received any recent calls to the boy's house "that would indicate that there was turmoil" there.

"At this point in time, we have no indication of motivation or ideology,” said Paul Delacourt, the agent in charge of the FBI’s Los Angeles field office. Santa Clarita is a city of more than 200,000 about 30 miles northwest of downtown LA.

Saugus High School and other schools in the area were locked down in the wake of the shooting.

The sound of gunfire sent some students running while others and staff followed recently practiced security procedures.

Kyra Stapp, 17, was watching a documentary in class when she heard two gunshots. Panicked students ran in and reported the shooting.

Stapp’s class and others were herded into a teacher break room where they locked the door and turned off the lights.

Kyra texted her mother and tried not make any noise. They exchanged messages as sirens screamed and helicopters and deputies carrying rifles and shotguns swarmed the campus. Then Kyra fell silent while officers escorted students out.

“She’s been texting me and all of a sudden she’s not,” Tracy Stapp said. “That was like the worst 10 minutes of my life, I swear.”

Authorities said the suspect was a student at the school who allegedly carried out the deadly attack on his 16th birthday.

Shauna Orandi, 16, said she was in her Spanish class doing homework when she heard four gunshots that she initially mistook as instruments from a band class. She said a student burst into the room saying he’d seen the gunman, and her classmates were stunned into silence.

“My worst nightmare actually came true,” she said later as she left a nearby park with her father. “This is it. I’m gonna die.”

Freshman Rosie Rodriguez said she was walking up the library stairs when she heard noises that “sounded like balloons” popping. She realized they were gunshots when she saw other students running.

Still carrying a backpack laden with books, she ran across the street to a home, where a person she didn’t know gave shelter to her and about 10 other students.

“I just heard a lot of kids crying. We were scared,” Rodriguez said.

“We never really thought this would happen in our school,” she said.

Television images showed deputies swarming the school and several people being moved on gurneys. Lines of students were escorted from the school by armed deputies.

Anxious parents were awaiting reunification with their children in a park near the high school.

Los Angeles County Undersheriff Tim Murakami tweeted an apology to the parents, saying investigators needed to interview the students before they could be released.

Orandi said she has heard about so many school shootings that she always assumed she’d panic in such a moment.

But she said she stayed calm, thanks to the help of her teacher who locked down the classroom.

The shots rang out — “bang! pop!” — and Orandi said she heard people yelling and running. Students in the classroom started crying and hugging one another.

“I just couldn’t believe it was happening,” Orandi said. 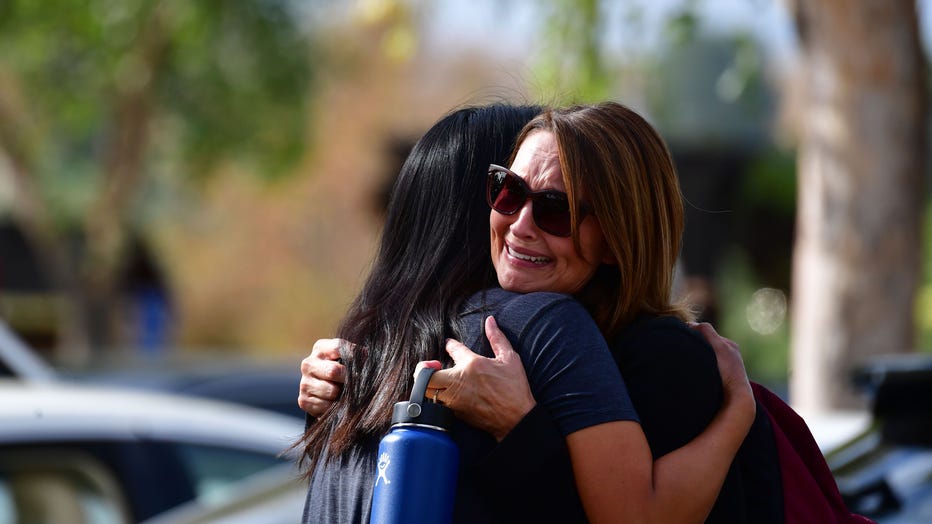 Women embrace in Central Park after a shooting at Saugus High School in Santa Clarita, California on Nov. 14, 2019. (Photo by FREDERIC J. BROWN/AFP via Getty Images)

She was escorted from the classroom to the school gym and later picked up by her father Hamid Orandi.

“She burst out crying like crazy, but I felt better because I knew the danger was gone,” he said. “It’s one of those random things you always have to worry about.”

His daughter said she would probably go home and vomit from the stress.

Earlier, the Henry Mayo Hospital said it received four patients from the incident, three males and one female.

"Female and two males are in critical condition. One male is in good condition," the hospital tweeted.

"This is a pretty sobering incident for those involved, including first responders," Los Angeles County Fire Department Chief Daryl Osby said during a news conference, noting that the first responder community had children who attended the high school.

Santa Clarita Mayor Marsha McLean said her grandaughter attended the high school, and that even though the city is the third-largest in Los Angeles County, "we are a close-knit family-oriented community, and our family sticks together."

"The feeling that went over me was indescribable," she said of the moment she heard the news. "I felt the same thing as our families."

"I want every single family member to know we are with you, our heart is with you, and that's all I can say as to this horrible thing," McLean added. "There are no words to describe it."

California Gov. Gavin Newsom released a statement in response to the shooting.

"I am closely monitoring the incident at Saugus High School in Santa Clarita this morning, and my Administration is working in close coordination with local law enforcement. Jennifer and I extend our thoughts to the parents, families and friends of the students and faculty, and the Santa Clarita community."

President Donald Trump "is monitoring the ongoing reports of a school shooting in Santa Clarita, CA," tweeted Judd Deere, the White House deputy press secretary. "The White House encourages all those in the area to follow the advice of local law enforcement and first responders."

Vice President Mike Pence addressed the shooting at the beginning of his remarks at a NASA event on Thursday afternoon.

"It's another heartbreaking day for students and parents in America," he said. "In this nation, we mourn with those who mourn, and we grieve with those who grieve. To the families, and to those critically injured, on behalf of the American people, I say from my heart: the hearts of every American are with you today, our prayers are with you, and our prayers are with all the doctors, nurses and hospital staff that are treating your loved ones."

More than 2,300 students attend Saugus High School in grades 9-12, according to the school's website.