At the request of the White House, the bust of Cesar Chavez sits with President Joe Biden’s personal and family pictures by his Oval Office desk.

It’s 22 inches tall, 9 inches wide and sits on a granite pedestal. We’re talking about a bronze bust of Cesar Chavez sculpted 25 years ago.

The piece, which used to belong to Chavez’s wife, now has a new home. 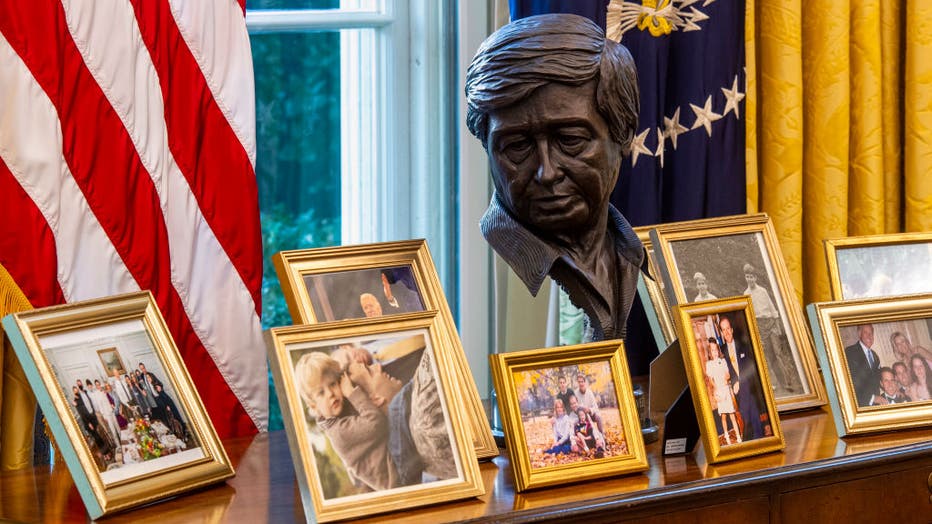 WASHINGTON, DC - January 20: A sculpted bust of Cesar Chavez oversees a collection of personal framed photos on a table seen during an early preview of the redesigned Oval Office awaiting President Joseph Biden at the White House in Washington, DC.(P

At the request of the White House, the bust sits with President Joe Biden’s personal and family pictures by his Oval Office desk.

Paul Chavez is the seventh of eight Chavez children. He’s president of the Cesar Chavez Foundation. He knew the bust was going to the White House, but when he saw it by right by the President, he says, "We were surprised. We looked and We marveled. We had to pinch ourselves to be sure it wasn’t a dream."

Says Chavez, "We’re very honored. We’re very proud of the placement but more than that we’re excited about the possibilities that this administration has done it put forward for our community and for all people of color."

A labor leader, civil rights advocate and humanitarian many believe that Cesar Chavez would be proud to have that likeness overlooking the President. But, there’s more. Over 20 Latinx have been appointed to the Biden Administration. Jennifer Lopez sang at the inauguration. Three cabinet appointees are Latinos. There is Biden’s nominee for Secretary of Homeland Security Alejandro Mayorkas. His Health and Human Services nominee Xavier Becerra and Education Secretary nominee Miguel Cardona.

He says it also suggests Biden’s priorities like, "healing of a really horrible phase of exclusion, kids in cages and now turning the page to an inclusive-bringing-into-the-family of the most humblest of workers like the farmworkers for example. So I think he’s sending a really powerful message."

And, one more thing. There is a Chavez family member in the White House. Cesar’s Grandaughter, Julie Chavez Rodriguez is the Director of the Office of Intergovernmental Affairs. That’s a top staff position in the White House. She also had worked in President Obama’s administration.

So now in the White House a granddaughter of Cesar Chavez and, under the same roof, a bust of her Grandfather and the power of the message he left behind.