The family of Daunte Wright responds to the guilty verdict of Kim Potter.

The family of Daunte Wright responded to the guilty verdict of former Brooklyn Center police officer Kim Potter, who was found guilty of first-degree and second-degree manslaughter in the deadly traffic stop shooting of Wright.

"The moment that we heard guilty and manslaughter one. Emotions, every single emotion that you can imagine just running through your body at that moment," a member of the Wright family said. "I kind of let out a yelp because it was built up, the anticipation of what was to come while we were waiting the last few days. Now, we’ve been able to process it. We want to thank the entire prosecution team.  We want to thank communities support.  Everybody who’s been out there that has supported us in this long fight for accountability." 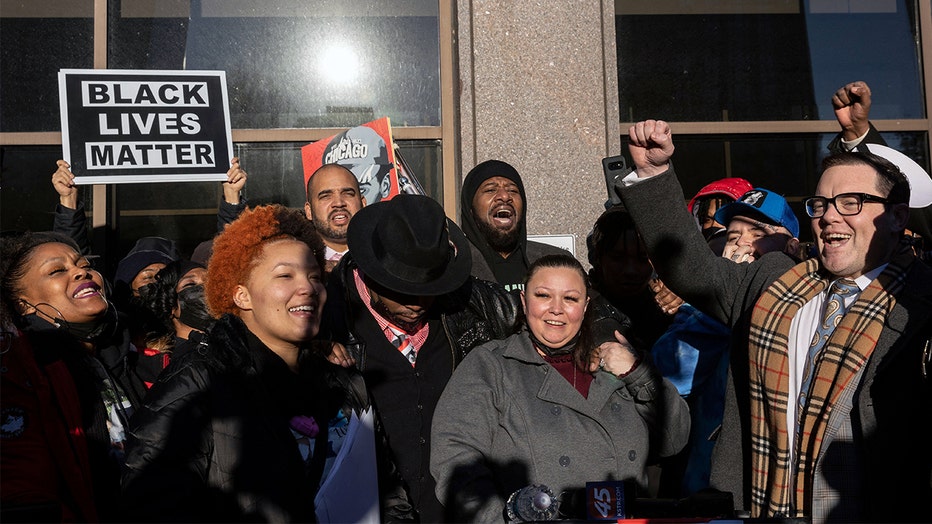 The family of Daunte Wright celebrates outside the Hennepin County Courthouse after the verdict was announced in the trial of former police officer Kim Potter in Minneapolis, Minnesota, on December 23, 2021. (Photo by KEREM YUCEL/AFP via Getty Images

"The Family of Daunte Wright is relieved that the justice system has provided some measure of accountability for the senseless death of their son, brother, father, and friend. From the unnecessary and overreaching traffic stop to the shooting that took his life, that day will remain a traumatic one for this family and yet another example for America of why we desperately need change in policing, training, and protocols. If we are ever going to restore the confidence of Black and marginalized Americans in law enforcement, we need to have accountability and a commitment to listening and to creating meaningful change. We must now turn our attention to ensuring that Kim Porter receives the strongest and most just sentence possible. It is also imperative that we focus on the conduct of Brooklyn Center and pinpoint its systemic failures that contributed to Daunte’s unlawful death."

Dozens of people outside the Hennepin County Government Center celebrated after Potter’s manslaughter guilty verdict was read. Chants of "guilty" were heard among the group as they held up signs.

Potter is scheduled for sentencing on Feb. 18, 2022. Twelve jurors deliberated for about 26 hours before convicting Potter on both counts.

The 49-year-old former officer shot and killed Wright during a traffic stop in Brooklyn Center on April 11. The deadly shooting of Wright occurred in the middle of the murder trial of ex-Minneapolis police officer Derek Chauvin for the death of George Floyd.

Body camera video of the incident clearly showed Potter firing a gun. Outrage over the shooting led to several nights of protest outside of the Brooklyn Center Police Department.

The defense claimed the shooting was an accident and that Potter, who is white, mistakenly grabbed her gun instead of her Taser when she fatally shot Wright, who is Black. Prosecutors argued Potter was reckless and negligent and should go to prison.

If Potter is convicted of any charges and prosecutors successfully argue for an upward departure.

The judge could go as high as the following sentences: