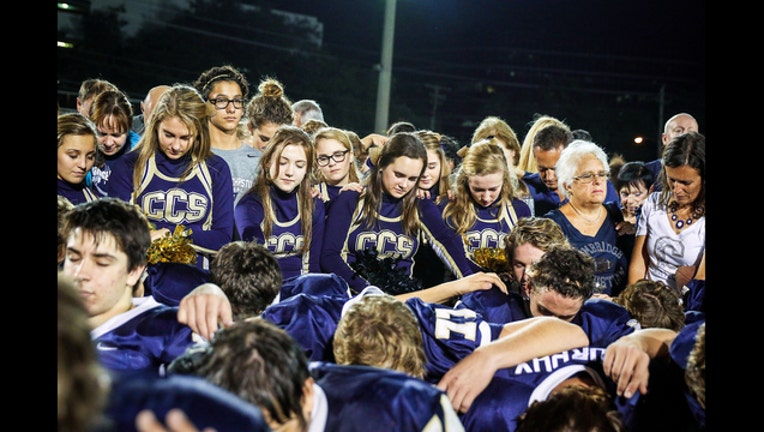 TAMPA (NSF) - A dispute over whether two Christian schools could use the loudspeaker for a prayer at a football championship game is headed to federal court after one of the schools filed suit against an organization that manages high school sports in Florida.

The nonprofit that operates Cambridge Christian School in Tampa said the Florida High School Athletic Association violated its civil rights by banning the private school and its opponent from joining in prayer over the loudspeaker at the game. The quasi-public athletic association has said it couldn't allow a prayer over the loudspeaker because of the First Amendment's ban on government organizations endorsing religion.

"By banning us from praying over the loudspeaker, the FHSAA told our students that prayer is something bad and should be forbidden," Tim Euler, head of the school, said in a statement announcing the suit. "We want our students to know that prayer is good and a fundamental constitutional right that should be defended."

The lawsuit asks the court to block the athletic association from continuing to follow its policy in the future, as well as requiring the association to pay the school's attorneys' fees.

The fight began in December, when Cambridge Christian was scheduled to play University Christian School, from Jacksonville, in the Class 2A football championship game at the former Citrus Bowl, now known as Camping World Stadium, in Orlando. The two schools traditionally offer prayers before football games at their home stadiums.

The athletic association declined a request from both schools to allow them to use the loudspeaker for a prayer before the game, saying it would expose the association to "legal entanglements." The association said it is subject to the same rules as government agencies because the Florida Legislature has recognized it as the governing body for high school athletics.

The two teams prayed together before kickoff of the championship game, but the lawsuit said fans couldn't hear the prayer from the stands.

The suit argues that the move was a violation of Cambridge Christian's rights to free exercise of religion and free speech, because the decision to ban the prayer was based only on religious content. It claims the athletic association violated the U.S. Constitution, the Florida Constitution and the Florida Religious Freedom Restoration Act.

Because the federal allegations take priority, the suit was filed in a federal district court in Tampa.

In an email to officials at both schools following the game, and included with the complaint, athletic association Executive Director Roger Dearing cited as a reason for the decision a 2000 case before the U.S. Supreme Court, which ruled against a school allowing speakers to use a public-address system to broadcast a prayer.

"The issue was never whether prayer could be conducted," Dearing wrote. "The issue was, and is, that an organization, which is determined to be a 'state actor,' cannot endorse nor promote religion. The issue of prayer, in and of itself, was not denied to either team or anyone in the stadium."

But lawyers for First Liberty Institute, a legal organization focused on religious cases that supports the school, have said the 2000 Supreme Court decision doesn't apply to the championship game because both schools are private. Attorneys from the firm Greenberg Traurig also are representing Cambridge Christian.