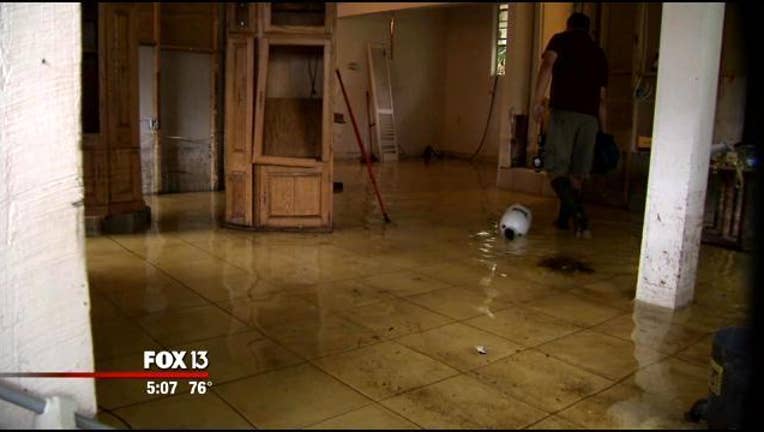 Representatives with the Federal Emergency Management Agency visited Pasco County Thursday, touring some of the areas hardest hit by flooding, giving residents hope that federal aid might be coming.

Speaking with reporters before heading out to survey the damage, a FEMA representative called this a "very unified, very coordinated effort."

"The goal here, because of the extent of what we understand has happened, is to move swiftly and quickly," said Ryan Deal, a spokesperson for FEMA.

Officials described this as a step in the process that could lead to a Presidential Disaster Declaration depending on whether the amount of damage meets the threshold.

Should that be the case, Gov. Rick Scott would have to officially request the declaration.

"With FEMA, comes the full cadre of government resources at the federal level should a declaration be issued," said Deal, who wouldn't put a time table on how long the process might take. "What's important today is that we understand exactly what is happening here on the ground."

Annette Doying, the Emergency Management Director for Pasco County, was among those who accompanied FEMA officials.

"It's my hope that the state and federal government determines that Pasco County has suffered significant enough losses that they're able to support our efforts as we move forward towards recovery," Doying said.

Representatives from the agency also talked with homeowners who are trying to recover from flooding.

"They came, they seen the inside of the house, they took pictures," said Holly Claypole, who still has about a foot of water in her house. "Please, I hope they have it in their hearts to please get some government aid in here."

Claypole moved with her family to her home in the Bass Lake community of New Port Richey two months ago. She said she can't believe the water has yet to recede in her neighborhood.

"We can die from this. You breathe in mold, you can smell it as soon as you walk in," she said, adding it was somewhat comforting to see FEMA assessing the destruction. "We have to stand tall, stand on our two feet and keep moving forward for our children and for ourselves, our safety."

For homes that are not livable, Pasco County is now offering vouchers for temporary housing, up to two weeks in a hotel.

Qualified renters or homeowners must be under 120 percent of the Tampa Bay median household income. For a family of four, that is $70,800