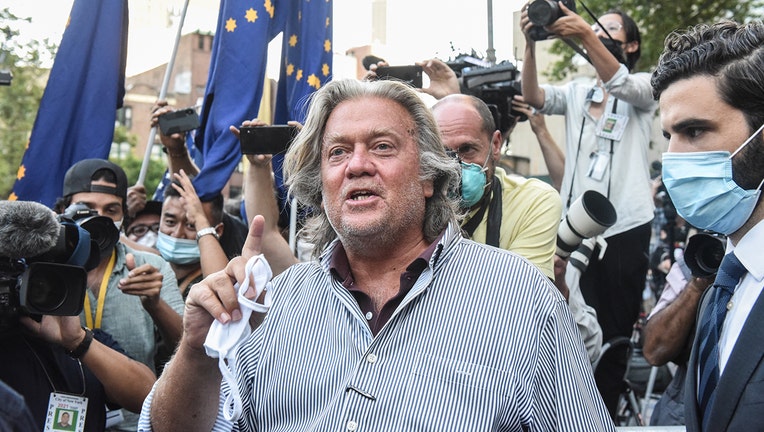 A federal probe that led to the announcement Thursday of conspiracy charges against Stephen Bannon, a former top aide to President Donald Trump, and three other men has roots in Florida.

The Florida Department of Agriculture and Consumer Services opened an investigation in May 2019 into the “We Build the Wall” charity, after consumer complaints that were initially submitted to the office of Attorney General Ashley Moody.

Bannon and three other men -- including Florida residents Brian Kolfage, the leader of the crowdfunded "We Build the Wall" effort, and Andrew Bodolato, a longtime political associate of Bannon -- are accused of defrauding donors under the pretense that money would be used to help build a wall along the nation’s southern border.

On his way out of court Friday, after being released without prosecutors asking the judge to set bail, Badolato did not respond to questions about Bannon or whether he did anything wrong.

The indictment says Badolato and Bannon secretly steered $350,000 from donors to Kolfage, who used it to buy things like cars and a boat.

It also says the four defendants each used hundreds of thousands in donor funds for personal expenses.

Badolato's son, Billy said after court his dad isn't rich and accused prosecutors of running a politically motivated investigation to take down Bannon, who he called a longtime family friend.

The grand jury found the foursome "repeatedly and intentionally" led the public to believe none of their donations would be used for their personal benefit.

They say Kolfage once texted Badolato, "As far as the public knows, no one is getting paid. Salaries will never be disclosed."

The judge said he had never seen prosecutors not ask for bail to be set, but agreed to let him go on conditions he limit travel to the Middle District of Florida and to and from the New York City Metro Area.

On August 31, Badolato will face a judge in the Southern District of New York via Skype, where the case will be prosecuted.

Meanwhile, Florida Agriculture Commissioner Nikki Fried said in a news release Thursday that her department’s Office of Agricultural Law Enforcement forwarded its investigation of the group to the FBI.

“From the beginning, this investigation has been fully non-partisan, independent, and carried out with the professionalism it deserves,” Fried said in a prepared statement. “As our department considers further action, I thank the U.S. Department of Justice and federal and state partners for their efforts to protect Florida’s consumers from alleged fraud.”

Among the complaints submitted to Moody’s office was one in January 2019 by Wendy S. Tien, then an assistant attorney general in Minnesota. Tien wrote to Moody that We Build the Wall, Inc. “holds itself out as a Florida non-profit corporation” and that may be “potentially or intentionally misleading.”

Bannon, Kolfage, Andrew Badolato and Timothy Shea have been charged with conspiracy to commit wire fraud and money laundering, federal prosecutors in the Southern District of New York announced Thursday.