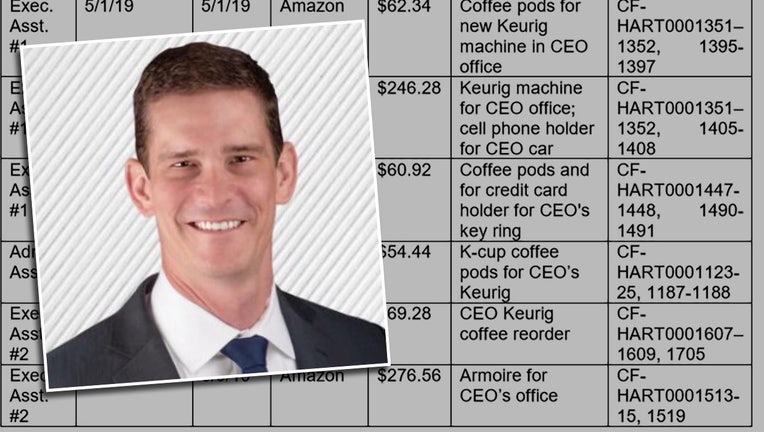 TAMPA, Fla. - An independent investigation by an outside law firm has found that HART CEO Ben Limmer violated at least eight board policies, according to a memo obtained by FOX 13.

The investigation began in November after the transit agency received a whistleblower complaint with concerns about the CEO’s “procurement practices, vendor relations and related issues involving HART’s CEO.”

Limmer has remained on paid suspension since November, still collecting his $210,000 annual salary.

During the investigation, the law office of Carlton Fields interviewed 22 witnesses, including the whistleblower and Limmer, and reviewed thousands of pages of documents, emails, and billing statements.

Despite not being in the whistleblower complaint, Carlton Fields found that Limmer frequently incurred charges of sales tax while using his purchasing card, or P-Card, an issue FOX 13 first raised in December. Board policy directs P-Card users to ensure sales tax is withheld because HART is tax-exempt.

Amongst the other violations found in the report, the investigation found that a management consulting firm TransPro received an unfair competitive advantage when bidding on a $3,000,000 contract.

Limmer acknowledged to investigators that TransPro received an advantage because the document used by other companies to apply for the bid was based on a template written by TransPro. Limmer claims that was an error by another employee, though the investigation could not substantiate that claim.

A secondary focus of the report was the CEO’s P-Card spending, first brought to light by the same FOX 13 report.

The investigation found the CEO was violating HART travel policy by asking, and receiving, advanced reimbursement on costs associated with travel. Limmer was also receiving per diem on meals that were included in conference registration cost, all in violation of the travel policy.

Based on the amounts of advance reimbursement requests, the former CFO suggested Limmer get a P-Card. Limmer became the first HART CEO to receive a P-Card. From there, the investigation found other violations associated with the use of the card. Specifically, Limmer purchased meals for his child while on a business trip to Canada and failed to pay back the money.

Limmer also directed his staff to make P-Card purchases that the report said “appear to be for his personal benefit or convenience.” For example, Limmer had his executive assistant purchase a $275 armoire, plus a $240 Keurig machine for exclusive use in his office and more than $200 in coffee pods.

According to the report, it was his assistant's idea to purchase a Keurig machine despite the fact that HART had coffee machines in their break rooms. The assistant denied the claim, saying Limmer requested the maching specifically for his office.

In addition to the office purchase, Limmer also charged HART more than $1,100 for a stay in a five-star hotel in Tampa, despite HART’s policy of not paying for local lodging. Limmer told investigators he mistakenly believed that as a speaker, the conference organization would pay for his room. HART ultimately ended up footing the bill.

While the report does not make any recommendations on Limmer’s employment status, it does outline a set of regulations they say will help strengthen existing policy.

The HART board is expected to discuss the finding at their Friday meeting.

Limmer responded to a FOX 13 request for comment by asking for more time.

“Like everyone, I just received the memorandum and want time to review it," he wrote. "My commitment to transform HART into the world-class transit agency Hillsborough County deserves has not wavered throughout this lengthy process.”