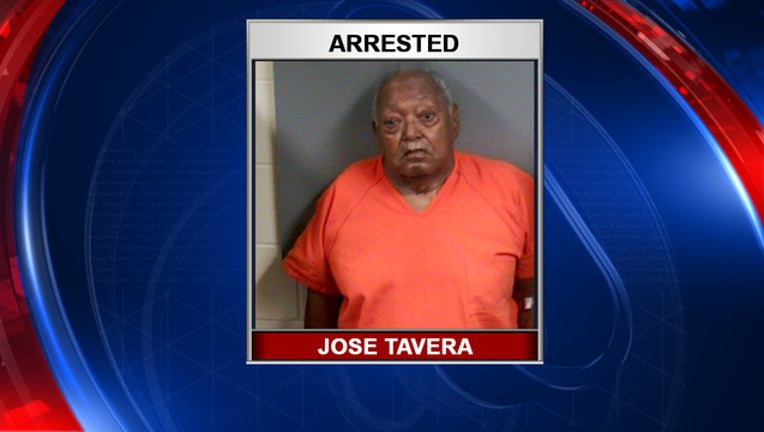 POINCIANA, Fla. (FOX 13) - Polk County deputies arrested an elderly man in the death of his common-law wife after he was found with blood on his hands, they said.

Before 6 a.m. Monday, Polk County authorities received a report of an older man, later identified as 85-year-old Jose Tavera, standing in the middle of the roadway at Marigold Avenue and Bell Tower Crossing in Poinciana.

When deputies made contact with Tavera, they noticed blood on his shirt and fingers, they said, and he couldn’t tell them where he lived. He was taken to a nearby hospital and deputies headed to his home on Martin Lane in Kissimmee.

Polk County deputies said they found the garage door was up and a door leading into the home was partially open. They said they announced their presence but received no response.

Inside the home, they found the body of the 90-year-old victim and Tavera’s common-law wife, Hilda Roman, in the master bedroom. Officials said there were no signs of forced entry. She was found in her nightgown with “obvious trauma on her face, head, arms and wrists,” according to the sheriff’s office. There was a wooden side table on her, and her injuries appeared to be the result of a beating, the agency added.

Relatives said the couple lived together for over 60 years.

Detectives said they spotted dried blood under Tavera’s fingernails on both of his hands, and “he appeared to be shaken and upset.” During an interview, Tavera told them he was not under the influence of any medications, he was healthy and he knew what day it was, officials said.

According to detectives, Tavera also said he didn’t have a home, a phone or a car, and he didn’t know the victim. Detectives said they showed him photos of Roman and of the Kissimmee home, but Tavera said he never met her and didn’t recognize the house.

Then, detectives asked Tavera to explain what was on his fingernails. He said it was paint and a man called him to do a painting job in Orlando, according to detectives.

A detective asked what phone the man called him on and Tavera “changed his story and said the guy ran into him on the street. Jose could not provide any further details regarding the painting job,” according to the sheriff’s office.

Tavera claimed the detectives were trying to accuse him of something that occurred at the Kissimmee home and stated, “I’m not a murderer,” detectives said. After that, officials said Tavera stopped answering questions.

He was arrested on a first-degree murder charge and was Baker Acted.