The Pasco County Sheriff's Office has a routine. A 9 p.m. routine, specifically, and it's catching on around the country.

NEW PORT RICHEY, Fla. - The Pasco County Sheriff's Office has officially taken ownership of an online phenomenon it started in 2016.

Social media users who follow the sheriff's office have likely seen the department post or Tweet a message ending with #9PMROUTINE. The routine is simple: lock your car doors.

"We were unfortunately in a trend of unlocked auto burglaries, so we started looking at ideas and ways that we could remind people every night that they should lock their doors," said Chase Daniels, the department's assistant executive director.

The effort was the brainchild of Sheriff Chris Nocco and Daniels. They say it was immediately successful, decreasing thefts from vehicles by about 35% in a matter of months.

Three years later, the #9PMROUTINE has caught on, especially on Twitter, where people and law enforcement agencies check-in from all 50 states and around the world.

"Started with just us and now, a little over three years later, we have just over 100 agencies that are doing it across the country and thousands of check-ins every night," Daniels said. "It's a global audience. We have people every night that check-in every night from India, from France, from Germany, from England, from Brazil."

This week, the department revealed that it now owns a trademark on the phrase, recently receiving approval from the state of Florida. 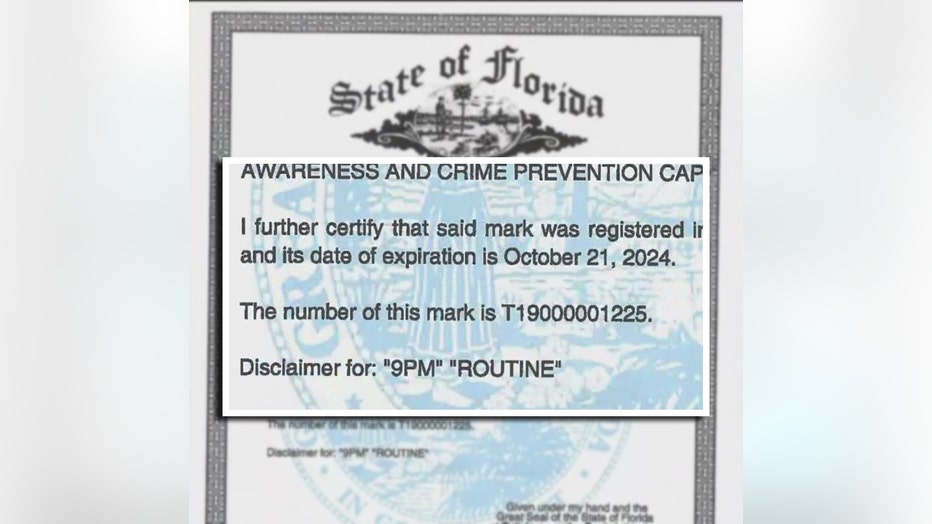 "It's really just about making sure that it stays focused on crime prevention, that it stays focused on law enforcement and doesn't become a venue for bad actors," said Daniels. "It's also a way that if we do see a bad actor, someone trying to profit off of it, someone trying to fundraise off of it, that doesn't seem right, it gives us that tool to go to that platform with the copyright and the trademark."

Of course, Daniels said, the sheriff still wants to see people and agencies checking in and locking up. Deputies said these are crimes of opportunity and this is an important reminder that people should also make sure they don't leave valuables in their car.