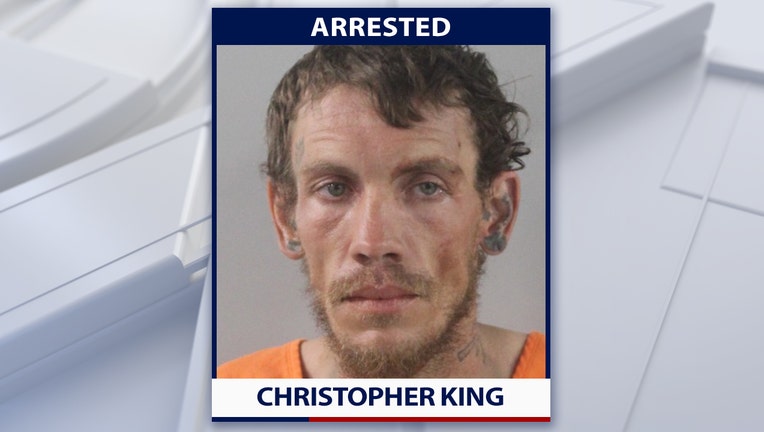 HAINES CITY, Fla. - Haines City police have arrested Christopher Lynn King, 32, after they say he stabbed a 79-year-old man and stole his car outside a medical complex on Patterson Grove Road around 1:30 p.m. on Friday.

According to police, King, who was wearing a ski mask, approached the man and stabbed him three times in the stomach with a foldable pocketknife with about a four-inch blade.

Officers located the vehicle on U.S. 27 near Posner Park in unincorporated Davenport. After a short pursuit, deputies from the assisting Polk County Sheriff's Office utilized the pursuit intervention technique (PIT) to disable the vehicle and get it off the road.

As the Toyota Matrix came to a rest facing southeast on the northbound side of FDC Grove Road, King got out of the vehicle and began to run. However, despite his attempts to fight law enforcement, King was quickly apprehended.

King was taken to AdventHealth Heart of Florida to be treated for minor injuries related to the crash before being transported to the Polk County Jail. No law enforcement officers were injured.

The victim was flown to a local hospital where he remains in critical condition.

"To attack an unsuspecting elderly man is an unconscionable and cowardly act," Chief Jim Elensky said. "I applaud our officers and the deputies from the sheriff's office, who are always willing to help, for their swift actions and relying on their training. We wish the victim a full recovery and will see to it, for his sake and the sake of his family, that this coward pays for these horrendous crimes."

King has been charged with attempted murder, aggravated battery on a victim 65 or over, armed robbery, grand theft auto, carrying a concealed weapon, fleeing to elude, driving without a valid license, resisting arrest with and without violence, wearing a mask in the commission of a felony and battery on a law enforcement officer. He was also issued multiple traffic citations.