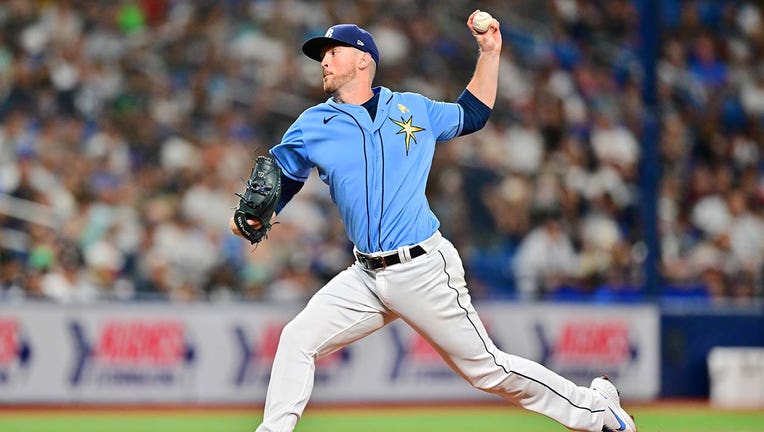 It was the first of six games between the teams in a 10-day span as New York saw its once-commanding 15 1/2 game advantage continue to evaporate.

Yu Chang had a two-run infield single and Manuel Margot drove in two with a single during a six-run eighth against Greg Weissert and Anthony Banda. Yankees manager Aaron Boone turned to infielder-outfielder Marwin Gonzalez with the bases-loaded and two out in the eighth, and he retired Harold Ramirez on comebacker off a 45-mph pitch.

New York has lost five of six, while the Rays have won four in a row to move a season-high 16 games over .500.

Yankees left fielder Andrew Benintendi left in the third inning after injuring his right wrist on a swing. X-rays were negative but he will have an MRI exam Saturday.

A pair of errors by third baseman Josh Donaldson helped the Rays go up 1-0 in the fourth.

Ramirez reached when Donaldson misplayed his grounder but was thrown out by right fielder Oswaldo Cabrera, who came in for Benintendi, trying to score on Donaldson’s throwing error following Randy Arozarena’s infield hit. Arozarena went to third on the play and scored on David Peralta’s single.

Isiah Kiner-Falefa had a leadoff double in the fifth and one out later the Rays opted to pitch to Aaron Judge, and the slugger walked on a 3-2 pitch. Springs then induced a fly ball from Cabrera and struck out Giancarlo Stanton.

Judge, leading the majors with 51 homers and 113 RBIs, also struck out twice and reached on catcher's interference. Stanton struck out three times and walked.

Yankees: 1B Anthony Rizzo will miss the series after getting a epidural shot for lingering lower back pain. ... RHP Jameson Taillon, hit on the right forearm by a batted ball Tuesday, has a bullpen session Saturday and should make his next scheduled start.