In the video, a person is seen waving out of the driver’s side window as the vehicle is dragged. (Credit: Grzegorz Buczynski via Storyful)

CHICAGO - You have to see it to believe it.

Shocking dashcam footage, captured earlier this week, shows a car being dragged by a semi-truck on Interstate 294 in the Chicago area.

The footage, captured by Grzegorz Buczynski – a resident of Justice, Illinois – shows the vehicle stuck partially underneath the semi-truck near the Roosevelt Road exit in Elmhurst.

Buczynski told FOX Television Stations he initially thought the people inside were dead, since the car was "almost half under that trailer."

In the video, a person is seen waving out of the driver’s side window as the vehicle is dragged. 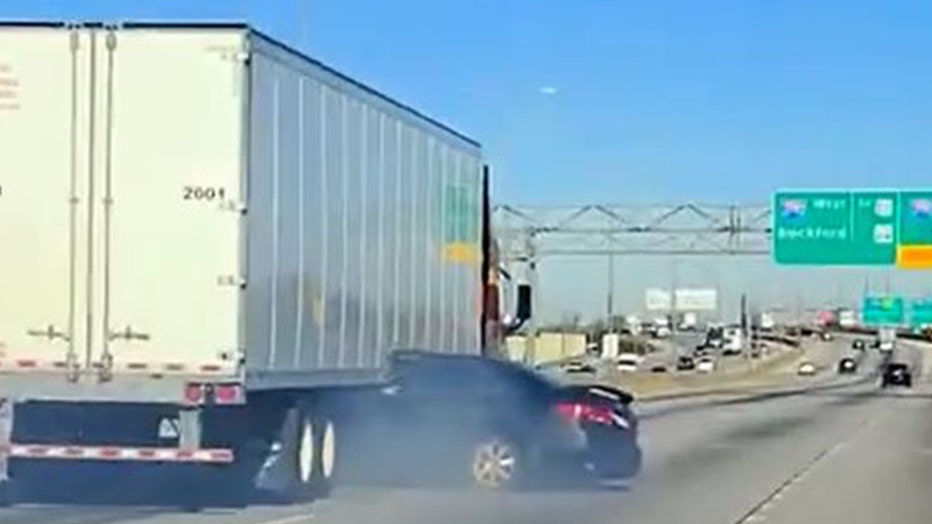 Still shot of car being dragged by semi-truck. (Credit: Grzegorz Buczynski via Storyful)

Buczynski continued, "I speed up and I start honking and waving to the truck driver. And he just waved me back...and then I believe he noticed the car under his trailer."

Illinois State Police said no injuries were reported. Two lanes of the highway were briefly closed while they dealt with the incident, reports said.

This story was reported from Los Angeles. Storyful contributed to this story.