What should kids be doing instead of screen time?

ALBERTA, Canada - The impact of screen time on children’s mental health has been a debated topic among those who study the subject, as our reliance on screens only continues to increase.

On average, children between the ages of 8 and 12 in the U.S. spend 4 to 6 hours a day watching or using screens — and teens spend up to 9 hours, according to the American Academy of Child and Adolescent Psychiatry.

Some research has demonstrated that excessive use may lead to delays in language and other developmental skills, while other literature has suggested that these outcomes are more trivial and may actually strengthen social connections.

A research team at the University of Calgary aimed to help inform this debate, analyzing dozens of scientific studies done on the subject.

They found a "small but statistically significant" link between certain behavioral problems in children under 12 and greater amounts of screen time. The problems included internalizing behavior issues, such as feelings of anxiety or depression, and externalizing behavior problems, like aggression, inattention, or showing defiance.

"There’s a signal there. We’re seeing some association between screentime and behavior problems. It’s not particularly robust, but it’s there," Dr. Sheri Madigan with the University of Calgary and the paper’s senior author, said of the findings. The paper was published on March 16 in JAMA Psychiatry. 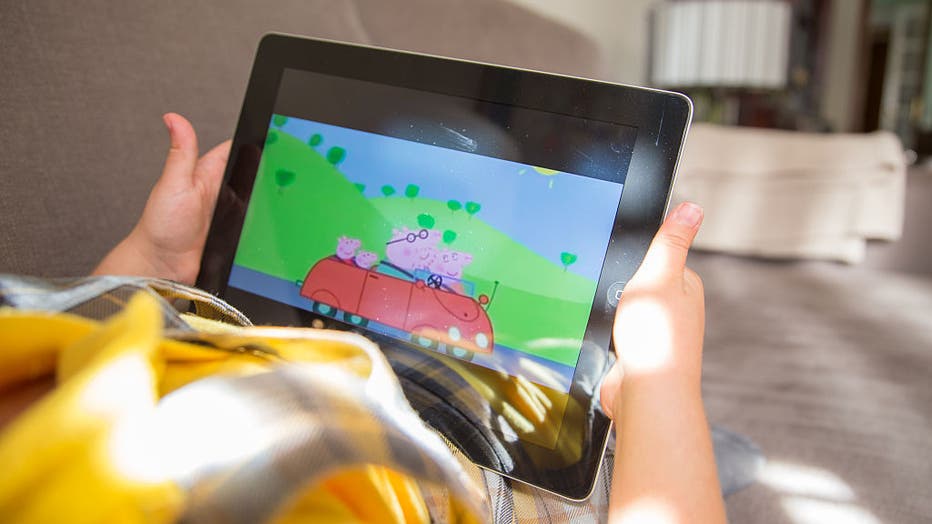 FILE IMAGE - A child watches a cartoon online with an iPad tablet while lying on the couch. (Credit: Artur Debat (https://www.gettyimages.com/search/photographer?photographer=Artur%20Debat) / Contributor via Getty Images)

Madigan noted how child development is "really multi-determined" and many environmental factors — such as parenting and the family’s socioeconomic status — can all have an impact.

What were the study’s findings?

The team sought out studies that included kids with an average age of under 12 and noted how many hours or minutes children were on screens like phones, tablets or the television. The studies also had to include a measure of behavioral problems reported by parents, kids or through a clinical diagnosis.

All the included studies were published before the COVID-19 pandemic, according to the researchers — when screen use skyrocketed amid online learning and stay-at-home measures.

In total, the meta-analysis reviewed 87 students with nearly 160,000 children 12 or under. It found that kids with more screen time had an 11% higher risk of more externalizing behavior problems like aggression or inattention. Meanwhile, more screen time was also associated with a 7% higher risk of internalizing problems like anxiety and depression, according to the research.

The team also found somewhat of a difference between genders.

"Essentially we found larger associations between screen time and externalizing problems in boys, relative to girls," Madigan said. She noted how boys tend to have higher amounts of screen use and are also more likely to have behavioral problems, which could be one possible explanation for the difference.

Screen time and kids: Quality over quantity, get involved

The American Academy of Pediatrics encourages parents to help their kids develop healthy media use habits early on. For children younger than 18 months, screens are discouraged beyond video-chatting with loved ones.

Parents of children 18 to 24 months of age who want to introduce digital media should choose high-quality programming or apps and use them together because this is how toddlers learn best. "Letting children use media by themselves should be avoided," the AAP says.

For children older than 2, the AAP says to limit screen use to no more than 1 hour or less per day of high-quality programming.

But managing a child’s screen time can be challenging for families. The American Academy of Child and Adolescent Psychiatry notes how screens can also offer many positives and says it’s never too early to develop a screen-time plan for kids.

It suggests that parents should be aware of programming to make sure it is age-appropriate and talk to their child about what they’re seeing on the screen, pointing out good behavior. And notably: "Set a good example with your own safe and healthy screen habits," the AACAP states.

Madigan, a clinical psychologist whose research has focused on how children’s early social experiences and relationships can influence their learning and mental health trajectories, said screen time for some kids may be more important for their outcome. Other kids can have moderate amounts of it and also be okay.

"As clinicians, at least, we have to really think about how we interact with kids and work with them around their screen time and recognize that each of them is going to have some individual differences," Madigan said.

As technology has evolved, screens have also become more programmed to grab and keep our attention. She noted how parents should talk with children and get them to think more critically about "how these devices really keep us on and keep us engaged."

"I think we have to talk to kids about how are you going about using devices, what’s it like for you when you want to turn it off but you feel like you can’t? What are some strategies you’re using to disconnect from devices," she said.