Deputies said three teens between ages 14 and 16 were involved as well as 19-year-old Tyreak Allen. A neighbor called deputies after seeing a group of teenagers roaming and burglarizing cars and checking cars in the Harmony neighborhood, investigators said. When deputies showed up, they saw the burglars in two cars.

"They saw us, they took off, went down to a cul de sac. At that point, they decided they didn't want to drive any further. They jumped out of the car, but they leave those cars in drive, and they don't care. Those vehicles then went straight into the pond," said Randy Warren, a spokesperson with MCSO.

Both cars were stolen, one from the City of Bradenton and the other from inside the Harmony neighborhood, Warren said. Inside one of the cars, deputies found two guns.

"We don't know yet, as we're still investigating whether those were guns that were stolen from this burglary spree or if those were weapons that maybe they already had," said Warren.

MORE: 'Crime of opportunity': Catalytic converter thefts on the rise across the country

Infrared helicopter video captured Manatee County deputies tracking down the 16-year-old boy and Allen in the backyards of the Harmony neighborhood around 3 a.m.

At one point, they hid on Tessa Walker’s back porch and tried to get inside her house, deputies said.

"We didn't really hear a whole lot until the police came. And then I was aware of lights and voices in the backyard, and that's what woke me up. They told us what was happening, that someone had tried to get in at the back door," said Walker. "I saw from the helicopter (video), from the police helicopter that they were actually trying to hide between our air conditioning units, which is right outside our bedroom window." 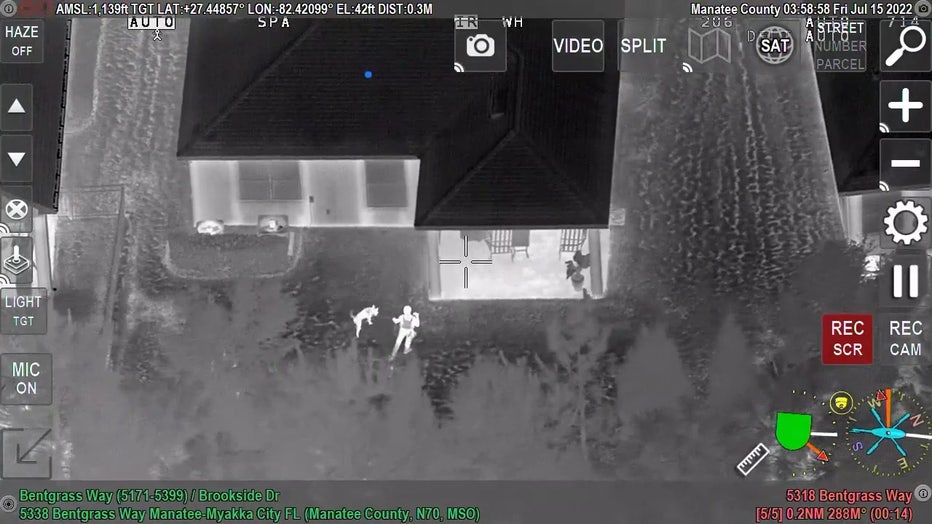 Walker said the woods behind her house and her neighbors’ houses are very dark at night.

"To think that they could have come in and had a gun, that that scares me more than just thinking that they or they were just some mischievous teenagers," said Walker. "The police did a great job. You know, they got out here quickly. They had the helicopter, they had the K-9 unit, and they caught them. So that's very reassuring."

So some neighbors said they will adjust their security measures.

"I think we are definitely going to beef up our security. We do have a house alarm. If they had been able to open our door, the alarm would have gone off. So I feel safer from that. But I think we're going to put up some more lights in the backyard and maybe some cameras," said Walker.

Deputies said the incident is a reminder why it’s very important to lock car doors and not leave keys inside cars.

"They don't care. These are criminals that are going around stealing whatever they can steal, and they will take your stuff. And if you leave it unprotected, you are an easy target. You will become a victim of these crimes," said Warren.