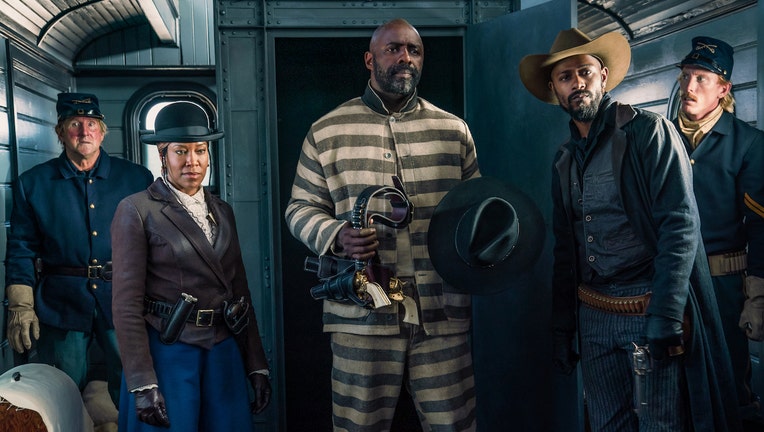 Washington, D.C. - The neo-Western subgenre has flourished in recent years thanks to narratives and protagonists that challenge decades-old conventions. The Coen brothers’ "No Country for Old Men," the superhero film "Logan," the capitalism-undermining "Hell or High Water," the prairie horror "The Wind"— each of them has moved away from the typical heroic White cowboy to offer a different perspective of the West and how it was won.

"The Harder They Fall" is the latest entry to flip and reverse our expectations, and its braggadocio, cinematography and stylistic flourishes are so compelling that they nearly make up for the film’s convoluted plot and thin characterizations.

Director Jeymes Samuel and cinematographers Sean Bobbitt and Mihai Mălaimare Jr. have crafted a series of beautiful images that are so steeped in history and deliberate in their subversiveness that they feel like myth-building. A Black woman wearing a U.S. military coat, astride a horse, standing on a train track. A Black man emerging from what looks like a tomb and breaking free of his chains. A duel between two young Black sharpshooters in the main street of a dusty outpost that ends in a spurt of brains and blood.

WATCH: "Once Upon a Time in Mexico"

Some of the film’s visual language gets repetitive after a while (so many extra-wide shots of people riding across rugged landscapes on horseback!), but "The Harder They Fall" often works better as a set of loosely connected vignettes than as a cohesive film. Samuel is not so much building an alternative history of the United States as he is revealing what was already there.

About ‘The Harder They Fall’

"The Harder They Fall" follows two groups of cowboys. First is the Nat Love Gang, led by the titular Love (Jonathan Majors) and including his former lover Stagecoach Mary (Zazie Beetz), sniper Bill Pickett (Edi Gathegi) and quickdraw Jim Beckwourth (RJ Cyler). They steal from other bandits, and because of that crime, are pursued by U.S. Marshal Bass Reeves (Delroy Lindo). But Lindo and Love are also both tracking the Rufus Buck Gang, who despite Buck’s (Idris Elba) imprisonment, have continued to operate in his absence. 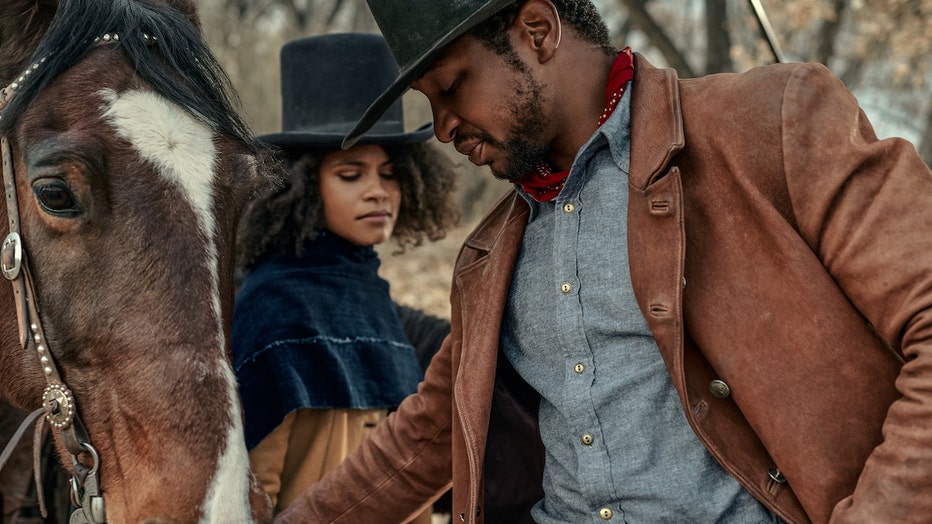 Zazie Beetz and Jonathan Majors in "The Harder They Fall." Image courtesy of Netflix.

The Rufus Buck Gang have one goal: protecting Redwood, a city they have built that is a safe haven for Black settlers. Meanwhile, Love, who has bad history with Buck, has a singular aim of his own: killing the man. That sets the two groups against each other by archetype: Love vs. Buck; Mary vs. the only woman in Buck’s group, his second in command Trudy Smith (Regina King); Beckwourth vs. the hot-handed Cherokee Bill (Lakeith Stanfield); and Pickett vs. muscle Angel (Jacobi Howard). Who will make it out alive?

See ‘The Harder They Fall’ for: a charismatic ensemble

Black cowboys existed, and Samuel takes their names for his fictional characters who fight, feud, fall in love, and live as they please. Their characters are unconcerned with the lives of White people, unless it is to exact vengeance upon them for their sins, their racism and their complicity. Instead, they live within their own ecosystem, with their own priorities and dreams. And this ensemble’s charisma — especially from Majors, Lindo, King, and Stanfield — is solid enough that their charm helps fill in gaps the writing does not.

The way Elba, King, and Stanfield touch their foreheads against each other when the Buck Gang is reunited, or the practiced dance that Majors and Beetz do when a make-out session is interrupted and they reach for their guns, communicates more about their characters than the script. Danielle Deadwyler is a scene stealer as Cuffee, the door guard at Mary’s saloon, for the confidence and frustration she communicates with her eyes and set jaw alone. Everything Lindo does, and the easy assuredness with which he carries himself, is gold. But the film’s inability to balance its storytelling is a consistent disappointment.

"The Harder They Fall" is so consumed with going big that it often feels like a film struggling with itself, and with giving its ideas enough room to breathe. There is simultaneously too much here and not quite enough, as if the film was built around its thrilling action sequences (a train heist, a bank robbery, a town-wide shootout) but then forgot to fill in the connective tissue. 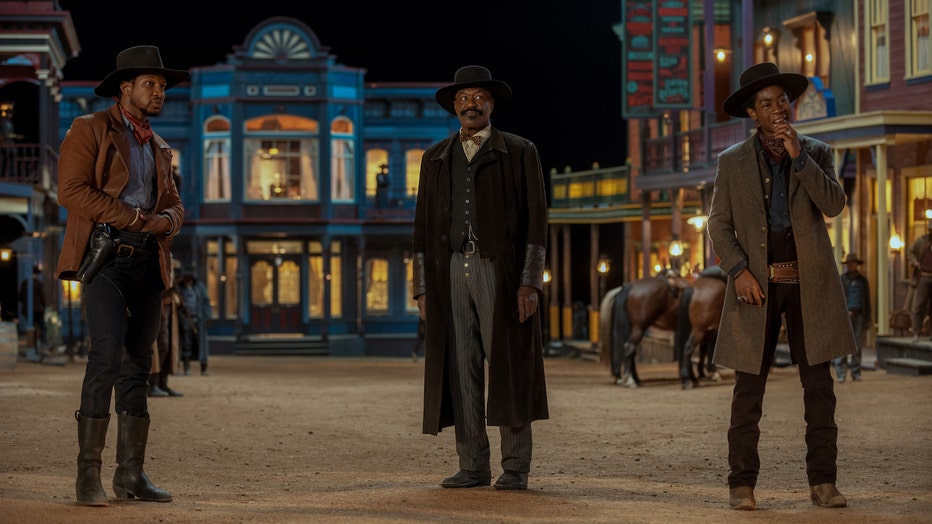 Jonathan Majors and Delroy Lindo in "The Harder They Fall." Image courtesy of Netflix.

Character dynamics aren’t quite crystallized until they’re painstakingly, tediously explained. Musical sequences, though refreshingly unexpected at first, increasingly stand in for needed dialogue. There’s a too-new quality to the film; the freshly painted sets and crisp costumes are at odds with the film’s self-categorization as a rough-and-tumble Western. And while the anachronistic soundtrack, including tracks from Jay-Z and Lauryn Hill, makes sense given Samuel’s background as a singer-songwriter and music producer, the needle drops are called upon to do too much work as transitional pieces.

There are joys throughout "The Harder They Fall," and the film is entertaining enough for the most part thanks to its cast and its amusingly reckless attitude toward violence. But between its overly glossy slickness and its 130-minute runtime, "The Harder They Fall" doesn’t go down as easy as it should.

Roxana Hadadi is a film, television, and pop culture critic. She is a member of the Washington DC Area Film Critics Association, the Alliance of Women Film Journalists, and the Online Film Critics Society, and is a Tomatometer-approved Top Critic on Rotten Tomatoes.

Howdy pardner, take a look at these here Westerns streaming for free on Tubi

Django Unchained (2012): Quentin Tarantino’s wild Western is a bit of a mixed bag, but if you’re not put off by the nearly three-hour runtime (or by the director’s blindspots, which lead to what we’ll call a shortage of nuance in its storytelling), the performances alone — from heavyweights like Jamie Foxx, Christoph Waltz, Leonardo DiCaprio and Kerry Washington — make this film worth the long, bumpy ride. Rated R. 165 minutes. Dir: Quentin Tarantino. Also features Samuel L. Jackson, Walton Goggins, James Remar, Don Johnson.