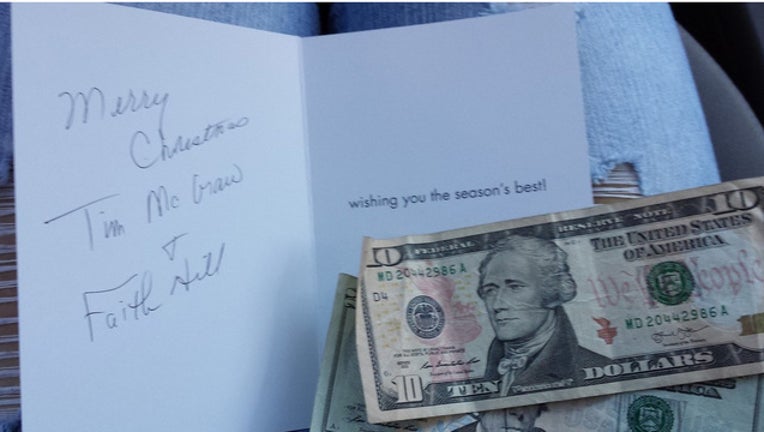 MACLENNY, Fla. - Country music superstar Tim McGraw's mother was out spreading holiday cheer in the name of McGraw and his wife, Faith Hill, at a Florida Walmart, where she paid off layaway balances for strangers.

Betty Trimble stopped in at a Macclenny Walmart Tuesday and paid off several balances and even gave out cards filled with cash to unsuspecting shoppers.

Jessica Lumpkin says she didn't even have anything on layaway, she was just picking up a package when Trimble handed her a card with money inside. The card said, "Merry Christmas, Tim McGraw and Faith Hill."

"I've never had this happen to me. I'm glad I call Baker County my home," Lumpkin told Action News Jacksonville. "(She) told me to get my daughter something for Christmas. Very sweet of her," she said.

Others, like Deborah Jackson, says Trimble paid off her daughter-in-law's balance, and says Trimble told people she was excited to play 'Secret Santa.'

Action News Jacksonville says Trimble has ties to Florida. She went to Terry Parker High School in Jacksonville and her mother lived in Glen St. Mary.