The new PPE shortages come amid a spike in coronavirus cases and hospitalizations in several U.S. states.

WASHINGTON - The Trump administration has ordered hospitals to begin sending coronavirus patient information directly to the Department of Health and Human Services, bypassing the Centers for Disease Control and Prevention.

The move has drawn criticism from some public health experts, who say the White House has been politicizing science and sidelining the CDC in its response to the pandemic.

The change in reporting will begin Wednesday, according to a document offering guidance for hospitals and clinical labs posted on the HHS website.

The HHS will now collect daily reports about the number of patients each hospital is treating, how many beds and ventilators are available, testing data, and other pandemic-related information. 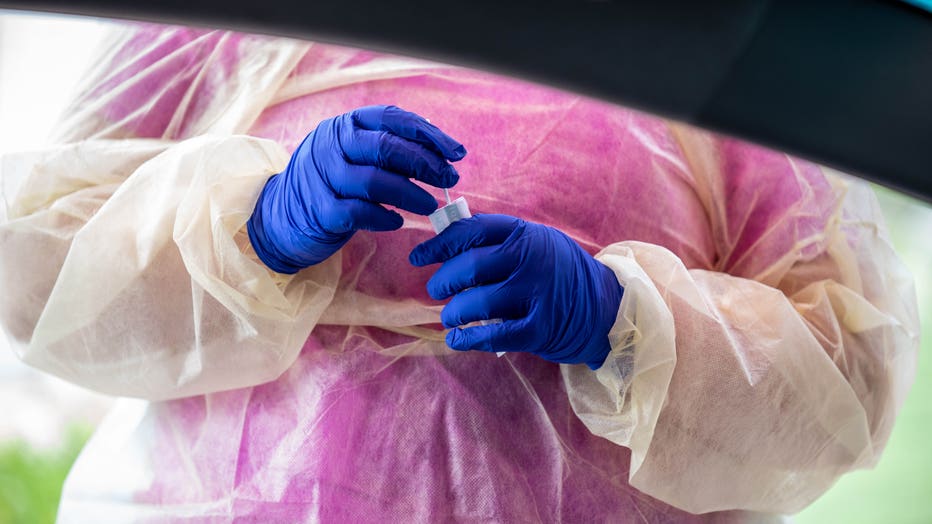 A nurse prepares to swab a patient at a COVID19 testing center on July 7, 2020 in Austin, Texas. (Photo by Sergio Flores/Getty Images)

Hospitals previously reported to the CDC's National Healthcare Safety Network, described by the agency as “the nation’s most widely used healthcare-associated infection tracking system.” The CDC is one of 11 divisions under the HHS, and has historically handled this sort of data.

The Trump administration claims the goal is to streamline data and help the White House Coronavirus Task Force with distributing scarce supplies and treatment.

Some hospital leaders welcomed the change, saying it will save time and energy from having to respond to requests from multiple federal agencies, according to the New York Times. But others criticized the move.

“The CDC is the right agency to be at the forefront of collecting the data,” Dr. Bala Hota, chief analytics officer at Rush University Medical Center in Chicago, told the newspaper.

There have been concerns among public health experts that the White House has been sidelining the CDC and Dr. Anthony Fauci, the nation’s top infectious diseases expert, amid a renewed surge of COVID-19 cases in the U.S. President Donald Trump has also suggested, contrary to evidence, that the severity of the pandemic that has killed more than 135,000 Americans is being overstated by critics to damage his chances of reelection in November.

“The four of us led the CDC over a period of more than 15 years, spanning Republican and Democratic administrations alike. We cannot recall over our collective tenure a single time when political pressure led to a change in the interpretation of scientific evidence,” they wrote.

Dr. Nicole Lurie, who served as the assistant secretary for preparedness and response at the HHS under the Obama administration, warned the data collection move could be used for political gain.

“Centralizing control of all data under the umbrella of an inherently political apparatus is dangerous and breeds distrust,” Lurie told the New York Times. “It appears to cut off the ability of agencies like CDC to do its basic job.”