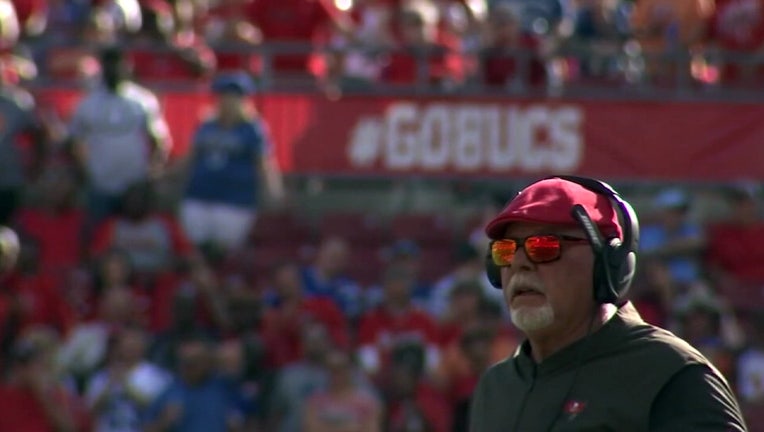 TAMPA, Fla. - It took five coaching changes over a decade-plus of futility before the Tampa Bay Buccaneers finally got it right, luring Bruce Arians out of retirement. Two seasons later, the 68-year-old quarterback expert has them in the Super Bowl.

Signing Tom Brady was a big part of solving the team's woes. So, was the offense-minded Arians' commitment to building a defense capable of giving him a realistic shot at transforming the Bucs from perennial losers into championship contenders.

The two-time NFL Coach of the Year with the Indianapolis Colts and Arizona Cardinals won two Super Bowl rings as an assistant with the Pittsburgh Steelers. He didn't get his first full-time pro head coaching opportunity until he was 61.

Arians ended a five-year stint with the Cardinals citing health concerns in 2017, only to return to the sideline to take over the Bucs after a one-year hiatus.

"I couldn't be happier for our players. They put in so much work, and our coaching staff has done such a great job," Arians said after Sunday's 31-26 victory over Green Bay in the NFC championship game. "Ownership gave us everything that we've needed, and I just couldn't be any more elated for these guys and the job they put in."

The Buccaneers' head coach is known for colorful sayings, and this is one of his favorites.

The first challenge was changing the culture of an organization that hadn't made the playoffs since 2007. The next was building on a strong nucleus of defensive talent and assembling an impressive group of playmakers that's helped Brady's transition to a new team after 20 record-setting seasons with the New England Patriots.

"There were times when I never thought it would happen, I never thought I would get a head coaching job," Arians said. "After the cancer scare in Arizona, sitting out that year and coming back, this has been the most rewarding year of coaching in my life."

Arians inherited a team that hadn't made the playoffs in more than a decade and hadn't won a postseason game since its 2002 Super Bowl championship run under Jon Gruden.

Gruden was fired six years later, followed first by Raheem Morris and then Greg Schiano, Lovie Smith and Dirk Koetter before Arians got a crack at changing the franchise's fortunes.

The 43-year-old Brady will expand on his record by playing in his 10th Super Bowl, hoping to expand on another record by winning a seventh title. And 25-year-old Patrick Mahomes of the Chiefs will be trying for back-to-back titles.

"I'm so happy for him, absolutely. It's amazing," said Brady, who's in the Super Bowl for a record 10th time after going 6-3 in nine previous trips with the Patriots.

"It's taken a lot of different people over the course of the season on offense, defense, special teams, to come through and that's why we're still playing," Brady said. "Again, just an incredible journey for all of us. I'm just proud to be a part of it."

Oddsmakers like Kansas City to win a second straight Super Bowl, making the Chiefs a field goal or better favorite to beat Tom Brady and the Tampa Bay Buccaneers.

While Brady's quest for a seventh ring has commanded much of the spotlight during the team's bid to become the first to play a Super Bowl in its home stadium, the defense has carried the team the past two weeks in wins over New Orleans and Green Bay.

As well as Brady played in building a 21-10 halftime lead, the six-time Super Bowl champion contributed to the Packers getting back in the game by throwing interceptions on three consecutive possessions in the second half. He conceded afterward that the stellar job the defense did against Rodgers was the difference in the game.

With Antonio Brown sitting out with a knee injury, young receivers Scotty Miller and Tyler Johnson both contributed to the NFC championship win. Miller had a 39-yard TD reception 1 second before halftime, and Johnson drew a pass interference penalty on third down, giving the Bucs a chance to run out the clock after the Packers trimmed what once an 18-point deficit to five with just over two minutes remaining.

Dropped passes have hindered the offense at times during the playoff. Brady wasn't as sharp in the second half against the Packers, however, one of his three interceptions went off the hands of Mike Evans. Chris Godwin had a big drop in the first half, but redeemed himself with a 52-yard reception on the next play.

Safety Jordan Whitehead left the NFC title game with a shoulder injury. Arians said Monday it was too soon to speculate on how it might impact his status for the Super Bowl.

7 -- takeaways by the defense this postseason, leading to 41 points.

Super Bowl vs. defending champion Kansas City and Patrick Mahomes on Feb. 7. The Bucs have won seven in a row since losing to the Chiefs at home 27-24 on Nov. 29.