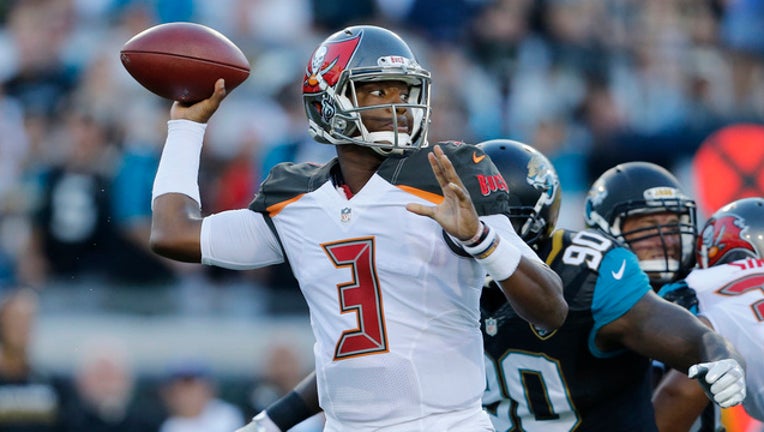 Jameis Winston throws the ball against the Jacksonville Jaguars in the first quarter of a preseason game. (Photo by Joel Auerbach/Getty Images)

JACKSONVILLE, Fla. (AP) - The Jacksonville Jaguars talk every day about starting fast.  In two preseason games, they've been able to experience it.

Blake Bortles threw two touchdowns passes in three drives and gave the Jaguars an early lead against the Tampa Bay Buccaneers, who rallied to win 27-21 in the preseason Saturday night.

"We talk about starting fast all the time and I think we're finally starting to do that," said Bortles, who led the Jags to 10 points on his first two drives in the preseason opener.

Second in the NFL last season with 35 TD passes, Bortles connected with T.J. Yeldon for a 14-yard score in the first quarter and then lofted a 24-yarder to Allen Hurns in the back of the end zone in the second.

Bortles completed 8 of 11 passes for 85 yards, with no sacks and few mistakes.

Jameis Winston had a slow start, misfiring on his first six passes, but rebounded against Jacksonville's second-team defense and found Mike Evans on a fade route for a 4-yard score. Winston finished 3-of-10 passing for 28 yards, with an interception.

Tampa Bay (1-1) and Jacksonville (0-2) held two joint practices during the week, so they had plenty of in-person preparation before a mostly meaningless exhibition.

Winston wasn't the only former Florida State player who made an impact in the game.

Jaguars rookie CB Jalen Ramsey had three tackles in his NFL debut. Jaguars LB Telvin Smith had a near-interception and was flagged for a late hit on Winston.

Bucs rookie Roberto Aguayo was wide right on a 32-yard field goal and later on a 49-yarder. Those were Aguayo's second and third misses of the preseason. A second-round pick from FSU who finished his college career as the most accurate kicker in NCAA history, Aguayo missed an extra point in the preseason opener at Philadelphia.

There were four penalties on coaches, including three in the first half. The Jaguars were flagged twice for unsportsmanlike conduct because of where coaches were on the field, although one of them was offset since Tampa Bay's staff was called for the same thing. The Bucs were penalized 15 yards for it early in the second half.

Buccaneers: LB Daryl Smith, returning to Jacksonville nearly four years after playing his 126th and final game for the Jaguars, did not dress for his homecoming. The 34-year-old veteran also sat out both joint practices during the week, but Koetter said it was precautionary.

Jaguars: Veteran DT Roy Miller got the night off for Jacksonville.

Buccaneers: First-round pick Vernon Hargreaves III had two interceptions in a span of six plays. Hargreaves stepped in front of Chad Henne's pass late in the first half and returned it 28 yards to set up a field goal. He picked off Henne again during the opening drive of the third quarter.

Buccaneers: CB Johnthan Banks, a former second-round pick who dropped on the depth chart following the additions of Hargreaves and Brent Grimes, had an interception.

Jaguars: Backup CB Dwayne Gratz, vying for a roster spot in the final year of his contract, had an interception. LG Mackenzy Bernadeau played well despite getting flagged for a false start early.

Buccaneers: "Well, it's great to get points, but we should have more." — Koetter on failing to score after a long, opening drive.

Jaguars: "I thought the guys did a really good job of rebounding and coming back and putting up some points." — Bortles on scoring two touchdowns after an ugly first series.