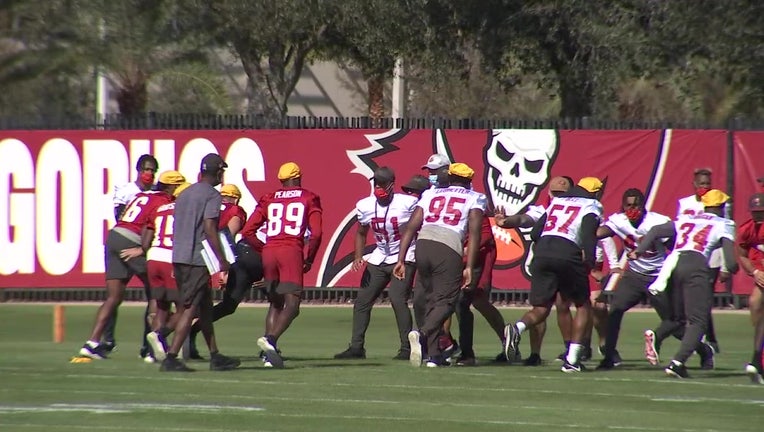 TAMPA, Fla. - The Buccaneers' secondary started showing signs late last season that they were coming of age, but this has been a different year. Teams are finding holes in the Bucs pass defense.

The Bucs just gave up a season-high 376 yards to the Rams and now Patrick Mahomes comes to town -- the only quarterback in the league averaging over 300 yards per game.

“I think he’s a very unique individual," said Bucs head coach Bruce Arians. “You teach young guys to never throw it back across the field, but he does it in a ridiculous manner – sidearm, underhand – and he’s very accurate. I think most guys cannot do that. He has a different skill set than other people as far as throwing back across the field. But, you’ve still got to chase him around [and] you’ve got to plaster down the field. He also does a great job of running and getting first downs himself. It’s a different, unique challenge when you start chasing him around.”

Mahomes has a lot of lethal weapons. Tight end Travis Kelce runs like a wide receiver and leads the NFL with the most receptions of 25-plus yards, and then there's Tyrik Hill, maybe the fastest player in the NFL, who is tied for the most TD's over 20-plus yards.

“They can stretch the field in a lot of different ways – vertically, horizontally – they’re good to run after the catch guys [and] they did a great job of building a roster to the type of players they like," continued Arians. "You’ve got to throw Sammy Watkins in there who can fly – every receiver they have can run. They’re built on speed and Pat [Mahomes] does a hell of a job distributing the ball to everybody.”

Is there a problem with Tom Brady or is it the offensive scheme he's running? Two of Brady's worst games have come in the last three weeks as the Bucs faced playoff-caliber teams.

Mahomes has a new pass defender to account for on the Bucs. Outside linebacker Jason Pierre-Paul has turned in to a ball hawk. JPP equaled his career total interceptions with two picks in the last two games. He nearly had another against the Saints three weeks ago.

“There’s just certain things that you see as a football player," said Pierre-Paul "I just saw my shot of getting it, went over to the sideline and told my teammates that I know I’m going to catch an interception. I was reading the screens all night, the opportunity presented itself and I grabbed it. I tried to score a touchdown but didn’t make it – maybe the next one.”

“He’s done a great job," Arians offered. “The one [interception] against Carolina was outstanding – dropped right into the zone – and this one, he read the screen all the way. He’s playing lights out [and] he should be on the Pro Bowl ballot for sure. He’s getting a lot of pressure and he was one of the best players we had on the field Monday night.”

As good as JPP is playing. The Bucs are going to need the best performance out of the rest of their defense to stay competitive in this game.