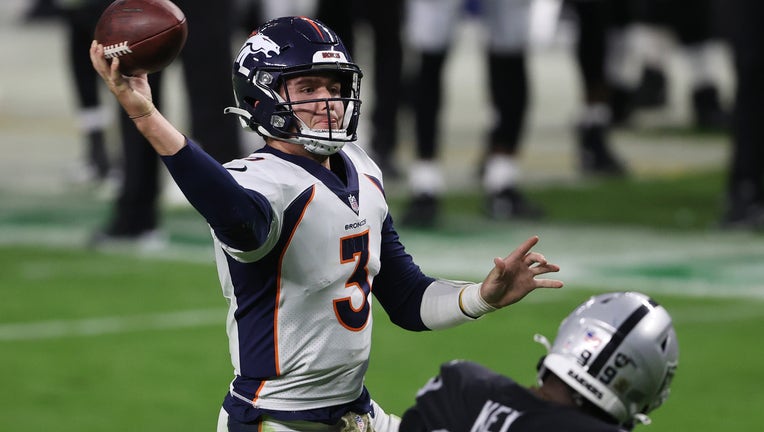 Drew Lock #3 of the Denver Broncos throws against the Las Vegas Raiders during the second half at Allegiant Stadium on November 15, 2020 in Las Vegas, Nevada. (Photo by Sean M. Haffey/Getty Images)

Denver Broncos quarterbacks Drew Lock, his backup Brett Rypien and practice squad member Blake Bortles were pulled off the practice field Saturday and sent home over concerns about their contact with QB Jeff Driskel, who is infected with COVID-19, a person with knowledge of the situation told the Associated Press.

How leagues are handling college football season amid COVID-19 pandemic

College football has been significantly impacted by the coronavirus pandemic.

The person, who spoke on condition of anonymity because the team hasn’t addressed the situation publicly, confirmed a report by KUSA-TV in Denver that the three QBs were pulled out of practice before it ended Saturday.

The Broncos (4-6), who are scheduled to host the New Orleans Saints (8-2) on Sunday, were working with the NFL to resolve the situation.

All three quarterbacks were on the field during the brief viewing period at the start of practice.

Coach Vic Fangio has said he wasn’t concerned about his other quarterbacks getting sick because contact tracing showed they weren’t in close contact with Driskel. On Saturday morning, Fangio said the quarterbacks hadn’t been within 6 feet of each other.

Lock, Rypien and Bortles have continued to test negative for the coronavirus.

The news on the quarterbacks broke Saturday about the same time the Broncos announced they had signed left tackle Garett Bolles to a four-year contract extension. Bolles, a former first round draft pick, has shown dramatic improvement this season.